Their struggle was not in vain 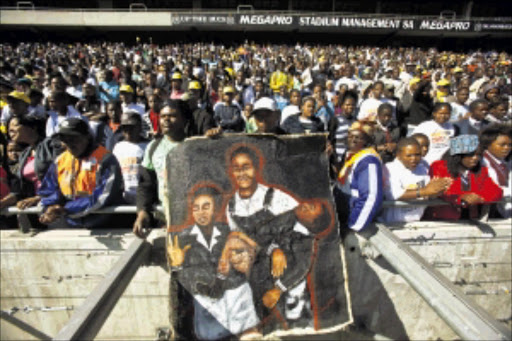 VARIOUS political parties and celebrities yesterday urged the youth to be responsible citizens and to learn from the class of '76.

Several political leaders expressed this message during the unveiling of tombstones of Soweto uprisings student leaders Tsietsi Mashinini and Khotso Seatlholo at Avalon Cemetery in Soweto.

The unveiling was part of the 35th anniversary commemoration of the uprising.

On June 16 1976 Mashinini and Seatlholo were among the organisers of a march by Soweto students protesting against the use of Afrikaans as a medium of instruction. The march ended with the fatal shooting of 13-year-old Hector Pieterson and many others, while hundreds of unarmed youths were wounded by apartheid security forces.

Mashinini and Seatlholo were buried side by side.

Mashinini's brother Mpho said: "They lived in the Struggle together as comrades. It is good for them that today they are remembered as heroes who are among those who fought for the liberation of this country."

Bontle Setshogoe, who represented the ANC, said: "Our black children have lost the moral fibre and need to stop all their wrongdoings. Today the entire world is looking upon us as role models, and our children need to improve their behaviour."

Azapo's Strike Thokoana said: "The language of the oppressor became a spark of the revolution to liberate our country. This country must not forget other fallen heroes like Mbuyisa Makhubu, who also contributed on that fateful day."

PAC spokesperson Lehlohonolo Shale said: "We salute our heroes. Today the majority of our people are living in poverty and many are landless. It is sad that after 17 years of democracy, 76percent of our land is still in the hands of a minority."

Speaking during a wreath-laying ceremony at the Hector Pieterson Memorial in Orlando West, Gauteng Premier Nomvula Mokonyane said "the fact that there is a nonracial education system today is a victory for the youth of 1976".

Molefe lashed out at learners who are normally seen drinking alcohol at Ghandi Square in Johannesburg on Fridays.

They all participated in the march clad in school uniforms.

Metro FM presenter Azania Ndoro said: "We are here in Soweto today to remind ourselves where we come from. What we need to ask ourselves today is if the youth of 1976 could face the brutality of the apartheid regime, what could prevent us from fighting crime such as rape, women and child abuse?"

Ramagoshi-Madibeng said: "They fought to ensure that today's youth is free. I could not miss this chance to pay respect to them."