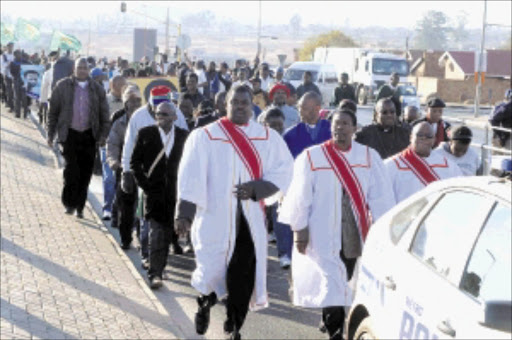 YOUNG people have been encouraged to seek knowledge to successfully continue the legacy of their forebears, writes Victor Mecoamere.

These remarks were made at a Youth Day commemoration at the Albertina Sisulu Hall in Orlando West, Soweto, yesterday.

The message came out of a joint SABC and Sowetan June 16 1976 35th anniversary celebration attended by pupils from private and public high schools in Soweto and Greater Johannesburg.

The speakers were among the youths who marched from Morris Isaacson High School protesting against Afrikaans as a compulsory medium of instruction.

Also among the speakers was Thandi Ndlovu-Molokoane, the sister of Hastings Ndlovu who was the first young child killed when police opened fire on protesting youths.

This eighth yearly celebration of the brave emancipatory exploits of the June 16 1976 youth cohort follows in the footsteps of a similar series of commemorations from 2004 under the following, respective themes: Remember June 16, Soweto Uprising, 30 Years Anniversary, From Trials to Triumph, Soweto Rising,Vibrant Youth Voices, and One Goal - Fifa World Cup campaign.

Some of the youths who recited poems and presented essays are Kgomotso Ntwagae and Nthabeleng Jankie of Orlando High School, Lebo Molefe of Bracken High School, and Menzi Mchunu of St John's College.