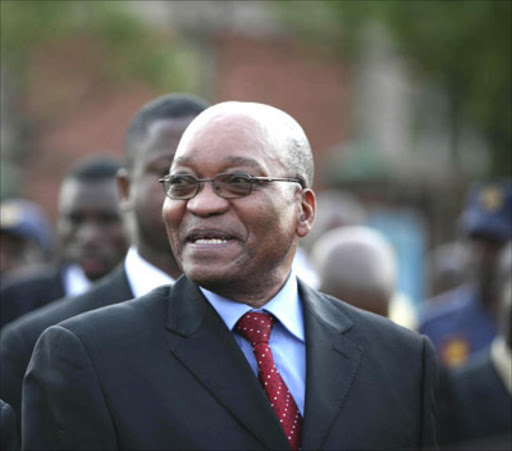 President Jacob Zuma is in Tripoli for talks to end Libya's conflict, as calls mounted in the international community for Muammar Gaddafi to stand down

Ahead of the trip, Zuma’s office said its main objectives include an immediate ceasefire, enabling the delivery of humanitarian aid and adopting and implementing reforms to eliminate  the causes of the conflict.

But it rejected as “misleading” reports the talks would focus on  an exit strategy for Gaddafi, saying the visit is part of African Union efforts to end the conflict between his forces and rebels fighting to oust him.

Libyan state television said Monday that Zuma was going to discuss the implementation of the AU “roadmap” for peace, as it reported fresh NATO raids on the Nafusa mountains in the far west and the town of Bani Walid, near Misrata.

Mustafa Abdul Jalil, who heads the rebel National Transitional Council, welcomed a call by G8 world powers for Kadhafi to stand down.

“The position taken by the G8 is reflective of the will of the international community as well as the demands and aspirations of the Libyan people,” Jalil said in the rebels’ eastern stronghold city of Benghazi.

G8 leaders from Britain, Canada, France, Germany, Italy, Japan, Russia and the United States called Friday for Kadhafi to step down  after more than 40 years in the face of pro-democracy protests turned full-fledged armed revolt.

Russia at the same time finally joined explicit calls for Gaddafi to go.

The Libyan regime responded by saying any initiative to resolve the crisis would have to go through the African Union.

“The G8 is an economic summit. We are not concerned by its decisions,” said Tripoli’s deputy foreign minister, Khaled Kaaim. “We are an African country. Any initiative outside the AU framework will be rejected,” he said, confirming Zuma’s visit on Monday.

In a statement on the eve of the visit, Zuma’s ruling African National Congress slammed the NATO bombing of Libya.

“We also join the continent and all peace loving people of the world in condemning the continuing aerial bombardments of Libya by Western forces,” it said after a two-day meeting of its executive council.

In Geneva, UN rights chief Navi Pillay condemned the brutality of crackdowns on protesters in Libya and Syria, saying the actions were shocking in their disregard for human rights.

“The brutality and magnitude of measures taken by the governments in Libya and now Syria have been particularly shocking in their outright disregard for basic human rights,” Pillay told the UN Human Rights Council.

Elsewhere on the humanitarian front, the oil chief in the National Transitional Council appealed to the international community to come to the financial rescue of the anti-Gaddafi camp.

“I don’t have any resources, not a cent,” Ali Tarhuni told reporters in Benghazi. “We’re in a critical situation. Our friends must remember that we are at war.”

Tarhuni said Libyans are “dying every day in the towns” besieged  by Gaddafi’s forces. “We have brave fighters but it’s hard to fight  on an empty stomach.”

Italian coastguards rescued 210 refugees from the Libya conflict  whose vessel was drifting aimlessly in the Mediterranean south of Lampedusa, prompting Rome to accuse Malta of inaction.

Two French lawyers said meanwhile they planned to initiate legal proceedings against French President Nicolas Sarkozy on Monday for crimes against humanity over the NATO-led military campaign in Libya.

A Libyan justice ministry official Ibrahim Boukhzam told reporters in Tripoli that Jacques Verges and Roland Dumas had offered to represent families he said were victims of the NATO bombing campaign.

“The two lawyers are going to file a complaint in the French courts in the name of the Libyan families,” Boukhzam said, at a press conference on Sunday attended by 30 representatives of the families.

In his statement late on Saturday, Jalil accused Gaddafi’s forces of attacking rebel-held cities in the Nafusa mountains “with  heavy artillery, tanks and rocket launchers”.

“They continue to shell and besiege the city of Misrata, and also impose arbitrary measures that include random arrests, torture, and raids of homes in the city of Tripoli, Zawiyah, Zwara,  and many other cities.

“We witness how Colonel Gaddafi presents initiatives to fool the  world and create the illusion that he is in search of peace,” Jalil  said. “It is with this in mind that we would like to reconfirm that the basis of any consideration for the resolution of the Libyan crisis is the removal of the main reason for this crisis, Colonel Gaddafi. As such, there is no room for negotiation until his departure and the departure of his regime.”

President Zuma will discuss photographer Anton Hammerl’s death during his visit to Tripoli for talks with Libyan leader Colonel Muammar Gaddafi, the SABC reported on Monday.

“[The issue] is going to arise. Firstly, because we hear that the journalist in fact died and was never arrested. That brings the  question why we were told information which was not accurate,” Zuma  said.

He said it appeared that Hammerl did not have a proper burial.

“We are hoping we will be able to discover something for the family.”

In a statement released by Hammerl’s family on Thursday, it urged Zuma “as a family man and father” to help locate the photographer’s remains and have them returned home so he could be put to rest.

Hammerl was covering the conflict in Libya when he was shot by militia loyal to Gaddafi on April 5 near the town of Brega.

According to American journalists Clare Gillis, James Foley and Spanish photographer Manu Brabo, Hammerl was left to die in the desert after they were arrested.

South Africa accused Libya of lying, it had assured officials he  was safe even though it knew he had been shot dead.

International relations and co-operation department spokesman Clayson Monyela said on Wednesday that it was only when Gillis, Foley and Brabo were debriefed that the South African government became aware that the Libyan government had lied.

“We ask you to please be our hearts and to be our voices in appealing to Libya for the whereabouts of Anton’s remains. It is imperative for us that he is not failed on this level,” the family said in its statement, which was e-mailed directly to the presidency.

“We ourselves cannot rest until Anton is given a proper burial in South Africa at a site that will become a place where his children, Aurora, 11, Neo, seven and 15-week old Hiro can come to pay tribute to their father.”