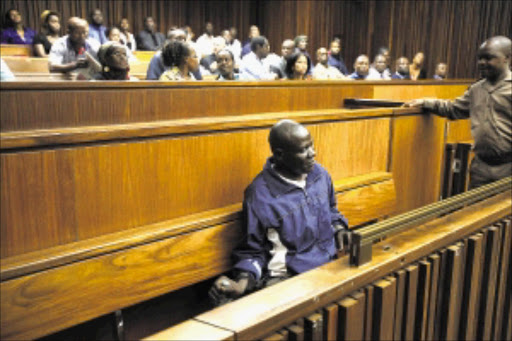 As Jack Mogale left the court, he shouted in Sepedi at the families of his victims, saying "You are also coming, I pray I will be out soon"

Judge Frans Kgomo sentenced Mogale, 42, to 16 life sentences which are to run concurrently. He will serve another 23 years thereafter, without the possibility of parole.

This was because Mogale was a danger to society, Kgomo said.

As Mogale left the court on Friday, he shouted in Sepedi at the families of his victims, saying "You are also coming, I pray I will be out soon."

Kgomo said Mogale was evil and should be kept away from women and society.

Mogale pleaded not guilty to all the charges against him. He continually testified that police, witnesses and his common-law wife Charlotte Manaka, were conspiring against him. Kgomo dismissed this claim as "far-fetched" and "fallacious".

The crimes were mainly committed at the West-End brick and clay factory near his home in Waterworks, Westonaria, and at various locations in Lenasia, south of Johannesburg.

He attacked and murdered 15 women and a child between March 2008 and March 2009. He was arrested when police were given his car registration number after a teenager went missing.