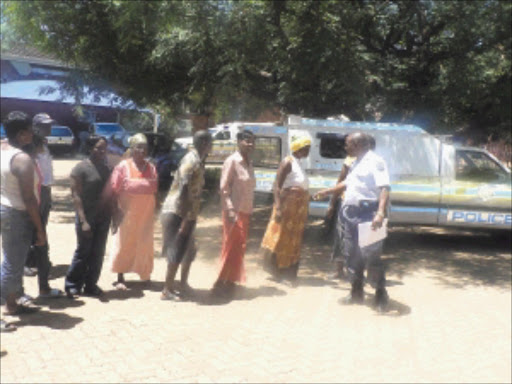 THERE was pandemonium at the Naphuno magistrate's court in Limpopo when 13 people appeared in court for allegedly burning the houses of people they accused of practising witchcraft.

The accused, all aged between 19 and 50 years, were arrested on Monday and appeared on Tuesday on charges of public violence.

Their appearance follows an incident at Santeng village outside Hoedspruit on Sunday when a group of angry villagers allegedly set alight seven houses belonging to people accused of practising witchcraft.

This followed allegations that a 13-year-old girl was caught naked casting a spell over a neighbour's house just after midnight.

The girl was allegedly arrested and forced to appear before the village's kangaroo court where she was grilled by the villagers.

The girl allegedly implicated some elderly people in the village, who she claimed had sent her to cast an evil spell at the house.

She allegedly revealed the names of those with whom she had allegedly practised witchcraft at night.

The group allegedly went to the homes of those fingered and set their houses alight.

Books, clothes, furniture, food and other valuables were lost in the fires, resulting in the owners becoming homeless.

A woman, whose name cannot be released and whose house was also set alight, pleaded with the police outside the court for protection.

The woman said her life and the lives of members of her family could be in danger if the suspects were granted bail.

She and her family, including those of the other victims of the attacks, have been accommodated in an empty building belonging to the Maruleng municipality, while others were given tents as temporary shelter.

"We are asking for the police to safeguard our tents 24/7 until investigations are completed and the court makes a decision," she said.

The 13 arson suspects were granted R500 bail each and their case would be heard again on March 30.