Oprah school pupil may be charged 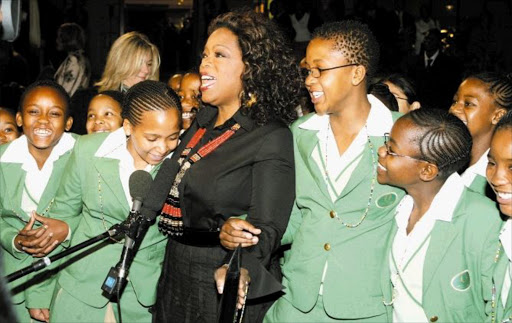 A PUPIL from the Oprah Winfrey Leadership Academy for Girls could face a charge of concealment of birth after a nurse found the body of a newborn baby in the teenager's bag.

Police said a nurse at a Gauteng hospital found the body after the schoolgirl, originally from Eastern Cape, had been admitted for treatment for excessive bleeding last Wednesday night.

The girl, 17, was discharged from Meyerton Hospital on Friday.

It is alleged that the pupil gave birth in the school and hid her dead baby in her school bag.

Police spokesperson Lieutenant Colonel Lungelo Dlamini said the girl was hospitalised after one of the employees at the school noticed that she was "bleeding excessively".

"After a thorough check-up it was confirmed that the pupil had given birth," Dlamini said.

Sowetan has learnt that at first the pupil denied that she had given birth. But after interrogation by the police she confessed.

It is also alleged that she told nurses that she did not know what had happened to her baby.

The girl allegedly fell pregnant after she slept with her boyfriend while away at home during the Fifa 2010 World Cup.

Dlamini said they had not charged the pupil despite a docket of concealment of birth being opened at the Meyerton police station.

"We are still gathering information and all the details that are needed, including postmortem results," Dlamini said.

"After the finalisation of our investigations the docket will be taken to the National Prosecuting Authority, where it will be decided which charges should be laid against the pupil."

Three years ago the school made headlines when former dormitory parent Virginia Tiny Makopo was arrested and charged with 14 counts, including indecent assault, assault, crimen injuria and committing immoral and indecent acts, with girls aged between 13 and 15.

Makopo spent five days in jail and was formally suspended on November , 2007 following a disciplinary hearing.

On October 4 last year all charges against her were withdrawn by magistrate Thelma Simpson in the Sebokeng magistrates' court.

On acquitting Makopo Simpson said: "There were numerous contradictions in the state witnesses' testimony. The learners were unable to provide accurate dates of the incidents and some exaggerated their evidence against Makopo."

Makopo has since reached an out-of-court settlement with the school.