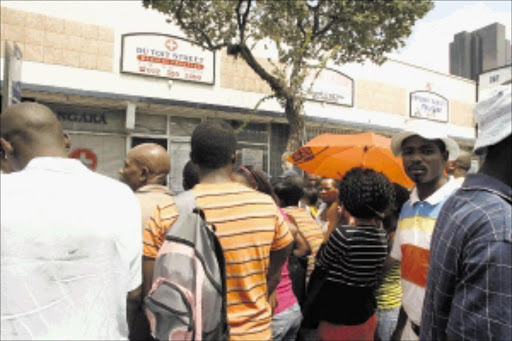 TWO doctors were arrested yesterday as part of a criminal syndicate allegedly involved in the renting out of surgeries and practice numbers to unqualified people to treat patients.

The doctors are suspected of being part of a criminal ring involved in crimes including fraud, corruption and indecent assault. Police netted six suspects. They are expected to appear in court today.

The arrests followed a joint sting operation yesterday morning that included members of the Hawks, Sars and Home Affairs officials, and were made in Gauteng, Limpopo, Eastern Cape and Western Cape.

Police said two of the detainees were authentic medical practitioners, who each owned three practices operated by bogus doctors.

One of the doctors operates two busy practices in Pretoria, while the other works at a hospital in Limpopo.

The surgeries are situated at GaMatlala village in Limpopo, Allemansdrift C and GaMagula in the Siyabuswa area near KwaNdebele, Mpumalanga, Moutse in Groblersdaal, Du Toit Street in Pretoria and Atteridgeville in Pretoria.

Among the items confiscated during the raids at various places were computers, a variety of medicines, cellphones and qualification certificates issued in Nigeria.

Police also confiscated more than R270000 in cash from one of the authentic doctor's residence.

According to the Hawks' Colonel MacIntosh Polela, they had targeted seven people, but only managed to arrest six.

The search for the remaining bogus doctor is continuing and those arrested were expected to appear in court in the four provinces today.

Polela said he could not understand how one of the bogus doctors was employed at a state hospital - BJ Vorster Hospital in Kareerdouw near Humansdorp in Eastern Cape.

Before joining the hospital, he worked for a medical agency inGauteng.

"There must be an investigation into how he came to work at the hospital," Polela said.

Polela also said they would investigate the authenticity of the qualifications of the doctors and whether they were in the country legally.

He said the surgeries had been shut down.

"People entrusted their lives to these people believing that they were authentic doctors but they (bogus doctors) knew nothing about what they were doing. Our duty is to save people's lives," Polela said.

One of the medical practices also houses a dentist as well as an optometrist and, according to a source, the optometrist started working at the surgery as a messenger and "some of us were surprised to learn that he was already responsible for treating patients with eye problems".

A woman who preferred to remain anonymous told Sowetan that the Pretoria doctor "is my family doctor. At times he is not available and we get treated by strangers.

"I no longer feel safe because these bogus doctors may end up giving us the wrong medication and put our lives in danger".