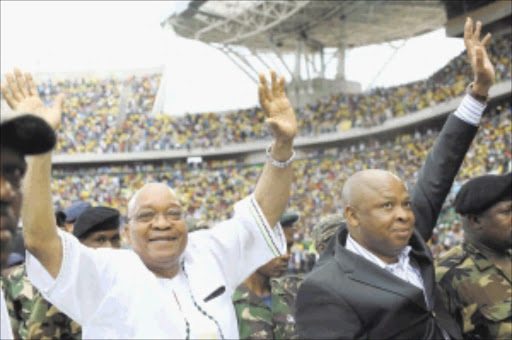 President Jacob Zuma told about 120000 ANC supporters during the January 8 celebration to mark the ANC's 99th birthday at Peter Mokaba Stadium in Polokwane, Limpopo, that the towels would be available soon.

He said the government would promote a free sanitary towels campaign in an effort to help those who cannot afford them.

The Young Communist League and the ANC Youth League had called for free towels for indigent women.

Earlier in the week the ANCYL said it intended to approach the government to provide free towels to young women coming from poor families.

League secretary Vuyiswa Tulelo said: "If government can give out free condoms and free prevention methods for the prevention of HIV and Aids, then why can't they make these towels available for free."

ANCYL president Julius Malema, who addressed Saturday's celebration before Zuma, told ANC supporters that the league would not abandon its demand for nationalisation and generational mix.

Malema, who had previously threatened that the league would not support leaders of the ANC who were not prepared to drive nationalisation, urged Zuma on Saturday to lead the struggle for economic freedom.

The ANCYL hosted a party a day before the official ANC celebration and its former president Fikile Mbalula was introduced as the "future of the ANC" by Malema and senior ANC member Tony Yengeni.

After Malema's stern address at the rally, rain started pouring as Zuma took to the podium. Zuma appeared relaxed and delivered a speech loaded with promises.

He conceded that political freedom without economic transformation was futile.

"Political emancipation without economic transformation is meaningless. That is why we have to commit ourselves to economic freedom in our lifetime, and the ANC must continue to be in the forefront of that transformation."

With the local government elections around the corner, Zuma's speech would not have been complete without mentioning some of the strides the ANC has made in the last two years.

He said that in 2009 the ANC-led government provided more than 200000 housing opportunities, more than 46million South Africans now have access to basic water supply and that more than 150000 houses a year were electrified.

Zuma said about 15million South Africans received social grants from the state and that the party's success over the years was reason enough for every citizen to go to the polls to choose local government representatives of their choice.