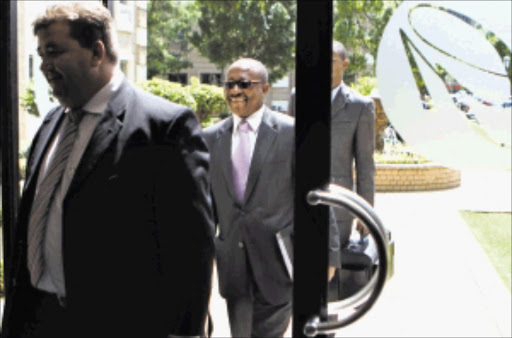 Mokoetle has been on suspension since September, following claims by the board that he failed to provide a turnaround strategy for the public broadcaster.

The embattled SABC board has brought 24 charges against Mokoetle - including one of failing to take disciplinary action against acting group chief operations officer Charlotte Mampane for allegedly eavesdropping on one of their meetings. The other charges are yet to be revealed.

The Times understands that the chairperson of the hearing, Advocate Karel Tip, ruled that none of the details can be revealed to the media.

Appearing calm, while armed with a defence team including senior advocate Jurgens Bekker and his attorney Bongani Dlodlo, Mokoetle occasionally made jokes with the media during the breaks.

"It is still a long way to Damascus," he said.

The proceedings are likely to proceed in camera for the next seven days.

This is the latest blow suffered by the beleaguered state broadcaster, which has suffered infighting among its board, chaired by Ben Ngubane.

Four of its board members have resigned as a result, and lobbying has begun among the ANC and its alliance partners, about who will fill their positions.