SABC comedy played out in parliament 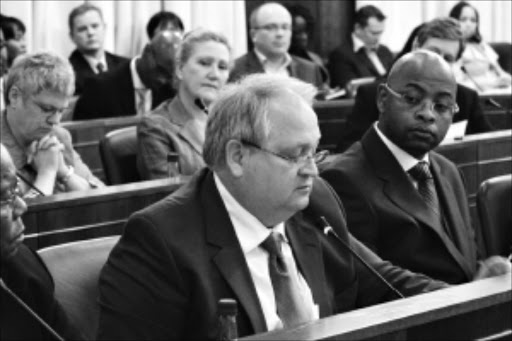 THE SABC is operating in an "illegal situation" because the board has not been able to agree on an acting chief executive officer.

SABC board chairperson Ben Ngubane told Parliament's communications committee yesterday that after suspending chief executive Solly Mokoetle, the board was so divided over whether chief financial officer Robin Nicholson should be appointed acting chief executive that they just did not appoint anyone.

"We are in an illegal situation," Ngubane said.

Both Nicholson and Mokoetle attended the meeting yesterday with Nicholson doing all the talking.

The board also gave Parliament a "vague" report on whether they were making progress with a turnaround strategy. They also failed to table a report into their own performance over the past six months.

"This is the singular most important failure of this board. There is no reason for the document not to be here," ANC MP Ismail Vadi said.

Ngubane told him the committee was being too harsh because at least the board had taken the SABC from a R830million debt crisis in 2009, to a R460million loss in April this year - halving the SABC's debt.

But Cope MP Juli Killian said: "The SABC is by no means out of a serious cash flow crisis."

ANC MPs lashed out, with Ntsiki Magazi saying: "We are not going to nurse entities that report to us because if you nurse these entities this is what you get".

The board was supposed to take charge of bringing the SABC out of its R830million debt crisis.

But soon after they were appointed they began fighting among themselves.

Last month Ngubane asked Parliament to investigate his complaints that the rest of the board were rude to SABC executives, obsessed with their own powers, and were plotting against him.

The rest of the board then said Ngubane's decision to appoint Phil Molefe as head of news, without consulting them, led to an "irrevocable breakdown of trust".

They then moved to suspend Mokoetle, which angered Ngubane. This week, the Presidency confirmed that four out of 12 board members have resigned for unknown reasons.

Although the remaining board members have now said they support Molefe's appointment as head of news, Ngubane told Sowetan that relations were still bad.

Meanwhile, Nicholson admitted that the SABC had not managed to slash costs as much as it had hoped.

He said part of the problem was big advertisers who didn't pay up on time, and even if they didn't pay, SABC managers and staff simply override the system, giving the advertisers even more credit.

SABC executives and the board were ordered to report back to Parliament on the turnaround strategy and their own performance on November 10.