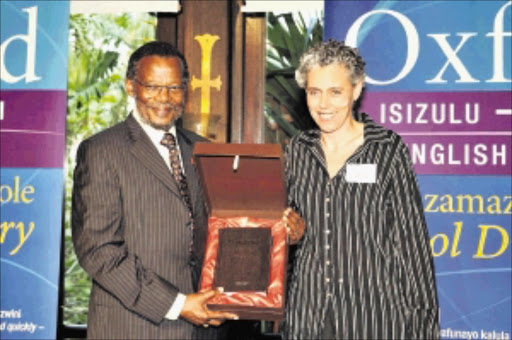 Education is the key to full liberation from poverty, Prince Mangosuthu Buthelezi said at the launch of the new IsiZulu-English dictionary at Zimbali Lodge in KwaZulu-Natal.

The dictionary, published by the Oxford University Press, is the first bilingual edition in 40 years.

The dictionary has alphabetical entries and several examples of the usage of a word where necessary. It is particularly helpful for children who are multilingual.

"I believe that education is the key to the full liberation of South Africans from the bonds of ignorance that enslave us to poverty, underdevelopment and hopelessness.

"During our liberation struggle black South Africans marched under the banner: Liberation Now Education Later. I was surprised at the short-sightedness of this strategy as Mr Oliver Tambo, the head of the ANC's mission-in-exile, began his career as a maths and science teacher at St Peters."

He said liberation brought official recognition of our multilingual and multicutural society. Education benchmarks had not been met and few learners were prepared for higher learning.

"The dictionary we launch today is relevant and custom-made for this generation. It will increase pupils' confidence and empower them to learn independently as well as increasing the general ability to communicate."

Managing director of Oxford University Press Lieze Kotze said: "In a country with a linguistic diversity spanning 11 official languages, it is essential that learners are able to access languages other than their mother tongue at home, school, and later on in their careers.

"These dictionaries represent our commitment to enhancing cross-cultural understanding in South African classrooms and assisting in the teaching of indigenous languages in schools," Kotze said.

The Khanyisa Development trust was presented with R200 000 worth of dictionaries and study guides.