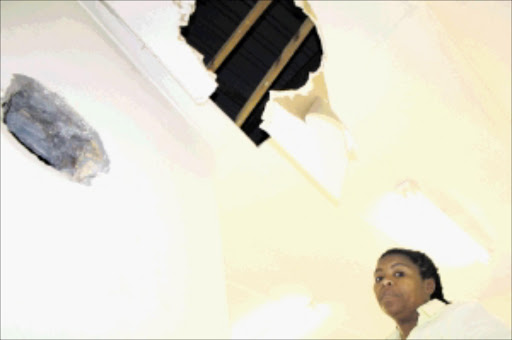 BURGLARS have left a primary school in Cape Town in ruin.

On Monday Ncumisa Sibula, principal of Vukani Primary School in Lower Crossroads, Cape Town, was greeted by a school turned up side down.

Apart from breaking the doors and destroying the roof, through which they entered, the thieves also stole tons of samp, beans, rice - food meant for the poor children who attend the school.

The vandalism did not stop there. The school was also stripped bare of copper pipes and water taps, while computers were also smashed up and looted of parts for resale.

Sibula told Sowetan that the thieves entered the school by smashing holes in the roof of her office.

The school is attended by 1057, mainly poor pupils, who are supposed to get three meals a day. They will now be left to starve.

The thieves also damaged the toilets.

"We found the toilets without copper pipes, water taps were also gone. The roof was also drilled and had huge holes,'' said Sibula.

She said the pupils had no choice yesterday but to relieve themselves at nearby homes.

"We have reported the matter to the Department of Education but until now the problem has not been attended to," Sibula said.

"Burglaries seem to be the daily occurrences at this school. The mother of all break-ins was in 2008, when all lab computers were stolen. After we complained about a spate of robberies the Department of Education installed an alarm system but that did not help.

"The funny thing is that we don't get any support from the community because when we ask them if they know anything, they tell us they had not seen anything."

Community member, Thoko Bheza told Sowetan that she had heard about the burglaries.

"I'm telling you they won't end because Lower Crossroads is a crime-ridden area, and with an influx of unemployed people, I believe crime will thrive until government does something,'' Bheza said.

Lower Crossroads police spokesperson Nondumiso Paul said four suspects aged between 18 and 28 had been arrested and would appear in court soon.

Spokesperson for Western Cape education MEC Bronagh Casey, Donald Grant, said: "Meetings would be arranged with all stakeholders, including SAPS, community police forums and other community structures to jointly address the safety issues at this school and others."

The department has arranged for 24-hour emergency security services at the school.