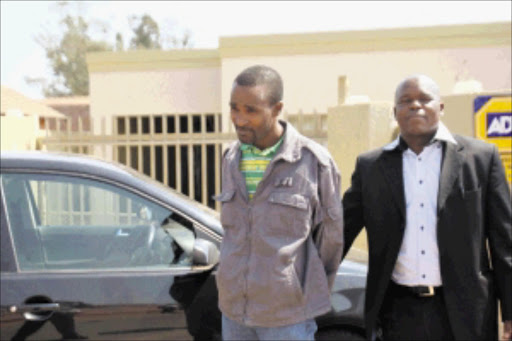 Zikhali is believed to be the kingpin of a land hijacking syndicate in southern Johannesburg, particularly Lenasia and Ennerdale. He watched in disbelief as police searched his 13-roomed house in Lenasia. Police seized documents and other evidence, including a large amount of muti from an outside room.

Zikhali is alleged to have sold stands that are either privately owned or belong to the provincial government. He also builds houses for his clients as he is a property developer who also owns a hardware store.

Spokesperson for the department of local government and housing, Fred Mokoko, said there were over 60 illegally built houses involved.

"We now have to get eviction and demolition orders," said Mokoko.

"Government has a moratorium on all public land, so it is not possible to buy new stands," said Mokoko.

But Sowetan has documentation that suggests that there are up to 1000 stands involved, and that council officials and police are implicated in the selling and approval of illegal house plans.

A victim said: "I paid R1000 to someone who got me a stand. But Zikhali stopped me from building a house saying it was his land. When I asked him for documentation, he said I should go to the department's offices and ask about him."

Government officials said the housing department was investigating the possibility of a mole in their ranks. It is also believed that there is a systems breakdown or leak in the department's anti-corruption unit.