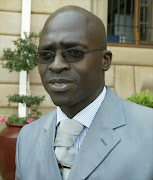 DEPUTY Home Affairs Minister Malusi Gigaba’s marital bliss has turned into a nightmare. Gigaba’s wife Thabong has applied for a protection order against him. She is accusing him of “emotional, financial and psychological abuse”.

These latest developments are a far cry from three years ago when Gigaba was wrapped over the knuckles by the government for spending more than R1000 on flowers for Thabong.

Yesterday the Gigabas were supposed to have thrashed out the matter at the Wynberg magistrate’s court but Thabong asked for a postponement. She is currently in Cuba.

Thabong first lodged the application in May and the couple appeared in court last month.

Yesterday Gigaba was to give reasons as why the order should not be granted.

“The last time Gigaba arrived at the court he used a separate entrance to avoid being seen by the public,” a source said.

Sowetan understands that Thabong and the couple’s daughter moved out of Gigaba’s ministerial home in Cape Town earlier this year.

This was after Gigaba had apparently moved a girlfriend into the couple’s Johannesburg home.

Thabong has since been renting a house in Cape Town.

Sources said Gigaba had not paid his daughter’s school fees or bought her any groceries for the past six months.

On Monday the couple’s spat took a dramatic turn when Gigaba ordered the police to arrest Thabong’s cousin, Lwazi Ngidi, for allegedly kidnapping their 10-year-old daughter.

Ngidi was detained by the police at OR Tambo International Airport for hours.

Thabong left their daughter with Ngidi when she went to Cuba last week. She gave Ngidi permission to take her daughter on holiday to East London. But Gigaba was angry when he found out.

He laid a charge of kidnapping against Ngidi.

After her release on Tuesday night, Ngidi said she was shocked by Gigaba’s behaviour.

“I am surprised and disappointed by what Malusi did. He knows me very well and he knew that their child was with me.”

She was released on warning pending investigations by the police.

According to sources Thabong was also forced to shut down her Facebook page after Gigaba’s alleged girlfriend – whose name is known to Sowetan – reportedly posted a message saying she would use “muthi” to get Gigaba to divorce Thabong.

Gigaba and the girlfriend reportedly attended the World Cup final at Soccer City on Sunday.

Yesterday Gigaba refused to comment on his marital problems.