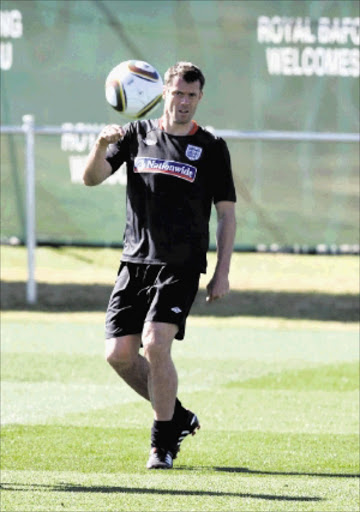 Jamie Garragher during the England training before heading to Cape Town in Rustenburg. Picture: SIMPHIWE NKWALI/12/06/2010

VETERAN defender Jamie Carragher has raised his hand for selection as England look to revive their World Cup hopes against Algeria on Friday.

VETERAN defender Jamie Carragher has raised his hand for selection as England look to revive their World Cup hopes against Algeria on Friday.

Following their setback against USA, the Liverpool defender will be the third defender to partner John Terry in central defence, as Fabio Capello seeks to address defensive concerns ahead of a crucial match in Cape Town.

Carragher, who came on for the injured Ledley King in their opener, which they drew 1-all against the Americans on Saturday, fancied his chances as he addressed the media after a morning session yesterday, saying he hopes experience will see England through.

"Yes, I'm ready to jump at the opportunity," said Carragher, who Capello begged to return to international football.

"Unfortunately I won't be the one picking the starting team. One day I'll be a coach and I will have the privilege to do so. For now it's Capello's responsibility."

Carragher was once said to be unhappy at the failure of successive England managers to use him at centre-back, preferring to play him as cover along the defence and even as a holding midfielder. But he should be content as he looks set to be restored, for the rest of the tournament, in his favoured centre-back position, which has become an area of concern since the withdrawal of Rio Ferdinand and King.

King was diagnosed with a groin injury yesterday and though reports insisted his World Cup was all but over, Capello is understood to be willing to give the injury-prone centre-back three weeks to recover. That means the Tottenham Hotspur skipper will be able to play only if England make the quarterfinals.

Meanwhile, Wayne Rooney and Ashley Cole sat out the training session and though it could have given the English a scare, Rooney suffered nothing more than a minor knock to his ankle.

Cole spent time in the pool as part of his rehabilitation to a long-standing injury, while goalkeeper Robert Green worked on his confidence after Saturday's blunder against USA.

Good news for Capello, though, is that Gareth Barry has returned to training and could play on Friday.