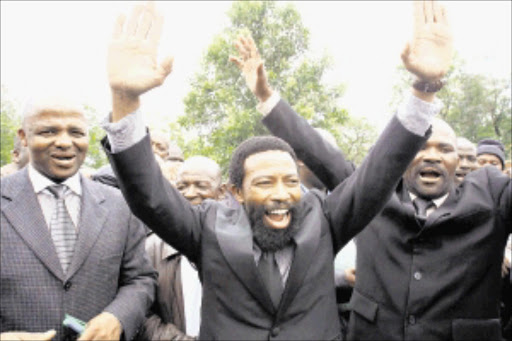 HAIL THE KING: AbaThembu King Buyelekhaya Dalindyebo wants to secede from South Africa and accuses the ANC-led government of being on his land illegally. The Bumbane Great Palace, right, will be the headquarters of the Thembuland Royal Empire. Pic. Zindzile Aries. 10/12/2009. © Unknown AbaThembu King Buyelekhaya Zwelibanzi Dalindyebo ( centre with beard) and his supporters rejoice after the Mthatha High Court yesterday garnted him a aleave to appeal. Picture:LULAMILE FENI 10/12/2009 DAILY DISPATCH

ABATHEMBU and Afrikaners have a similar dream - to have their own homelands where they can "live in peace".

ABATHEMBU and Afrikaners have a similar dream - to have their own homelands where they can "live in peace".

Since last October King Buyelekhaya Dalindyebo has championed his tribe's charge to secede from South Africa.

This decision followed his conviction by the Mthatha high court that sentenced him to 15 years for culpable homicide, kidnapping, arson and assault with intent to do grievous bodily harm on charges dating back to 1995 and 1996. He is out on bail.

On January 14 Votani Majola, a lawyer representing abaThembu, served papers on Parliament announcing the secession of abaThembu from South Africa to form Thembuland.

While some people dismissed the move as a gimmick by the king to avoid going to jail, a leading analyst says that Dalindyebo should be taken seriously.

Shadrack Gutto, a professor of law and African Renaissance at Unisa, says the AbaThembu are serious because of the groundwork they have done. The proposal to open their own bank next month is the first step.

"The government must engage with them before it reaches boiling point. When it has escalated and gathered momentum it will be hard to control."

He said the land claim would be tricky.

But their lawyer, Majola, insists the bid to secede is not aimed at helping Dalindyebo avoid jail.

Majola said: "Yes the conviction of the king brought the secession closer by maybe a year or so but we were going to secede anyway."

He said the abaThembu wanted to secede because the ANC-led government had failed to meet their demands.

"For the past 15 years we gave the ANC things to do to resuscitate the Thembus. Instead they decided to criminalise the monarch," he said.

He said one of the issues they were fighting for was funding for the monarchy, just like the state spends R48 million on the Zulu king annually.

The Thembus, with more than 10 million people, did not receive a cent.

He said the government was on their land illegally but they would finalise the takeover soon.

But Western Thembuland's King Lwandile Matanzima said that they were independent from Dalindyebo's leadership.

"We have no aims of leaving South Africa," he said.

Meanwhile, Nkosi Pathekile Holomisa of the amaHegebe, says the Thembu tribe will defend Dalindyebo to make sure he does not go to jail. But they will not support secession.

"AbaThembu are quite clear that the king has to be defended in his criminal cases because he represents us, he is our symbol," Holomisa said.

Holomisa is part of a four-man task team appointed to make sure the king is not jailed.

He said that he was not aware of the King Dalindyebo Justice Task Team led by Votani Majola but hoped to meet them soon.

Holomisa said that they had met Dalindyebo's lawyer, Zem Gqabi.

"The lawyer assured us that on appeal there is a high possibility of winning it on merit because the case has been handled rather shoddily by the presiding judge, the prosecution and the police."

He said they also met the Minister of Justice to inform him that the state should pay the legal fees of the king because he did his crime acting as a traditional leader.

"We also met Makhenkesi Stofile, who was premier at the time (the crime was committed), because there were allegations that the ANC was involved in shenanigans aimed at toppling the king."

He said that they would also meet Nelson Mandela as the senior of the Dlomo clan. After ensuring that Dalindyebo did not go to jail they would talk about his conduct.