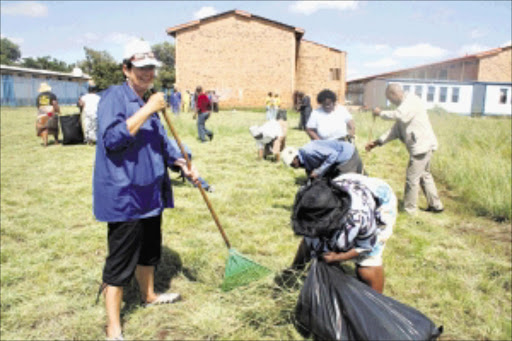 LEADING BY EXAMPLE: Gauteng education MEC Barbara Creecy leads the clean-up team at Bokamoso Secondary School in Thembisa yesterday ahead of the start of the school term on Wednesday. Pic. MUNYADZIWA NEMUTUDI. 10/01/2010. © Sowetan.

GAUTENG MEC for education Barbara Creecy left the comfort of her office and joined parents in cleaning up a school in Thembisa.

As part of the Back-to-School Campaign Creecy, who was in blue overalls, and her executive staff cleaned toilets, cut grass and fixed broken doors at Bokamoso Secondary School yesterday.

Members of the school governing body, parents and the community also lent a hand in the initiative.

The initiative follows an evaluation of Gauteng schools' readiness, which was done in November last year.

More than 250 officials visited 2101 schools to evaluate the availability of classrooms, staff complement , infrastructure development, teaching preparations and admissions for 2010.

Creecy said from the evaluation 80 schools were identified as needing an immediate clean-up, and Bokamoso was one of them.

"Our aim is to ensure that on Wednesday teaching and learning begins and pupils don't have to do any cleaning," Creecy said.

Her department had bought 156 mobile classrooms to tackle overcrowding.

Two classrooms were given to Bokamoso in November.

"It will become our policy to ensure that our schools are clean and to mobilise the community to join in the campaign," Creecy said.

Creecy also outlined plans to deal with pupils' late registrations, which she said was one of the biggest disruptions when schools reopen.

"We have put up a centre at the district office to capture data from schools so that when one school is full, we will know where to relocate the pupil," she said.

Creecy said the Back-to-School campaign will be rolled out in Gauteng every year.

Nick Pitse, principal of Bokamoso, was thrilled with the clean-up campaign.

"On Wednesday we will allocate classes and start teaching without worrying about the school's facilities," he said.

"We wish to express our sincere condolences to the family. We feel sad and helpless about this," she said.

Sibongile Makhudu, Nomsa's cousin, said: "I did not expect this from Nomsa. She was a cool girl."