I wasn't involved in murder - Teen 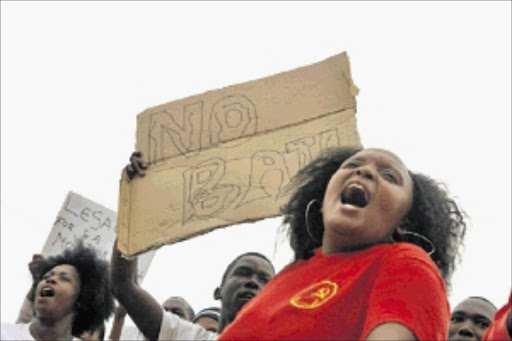 OUTRAGE: Protesters outside the Rustenburg magistrate's court make their point during the appearance of the five accused of the brutal slaying of entrepreneur Mirriam Khoza, 45, and her family. Pic. Bafana Mahlangu. 05/01/2010. © Sowetan. 20100105 BMA Protesters outside the Rustenburg magistrates' court making their point during the appearance of four men accused of killing a businesswoman and her family. PHOTO: BAFANA MAHLANGU

A TEENAGER accused of taking part in the murder of a Rustenburg businesswoman and her family yesterday blamed one of his uncles for the killings.

A TEENAGER accused of taking part in the murder of a Rustenburg businesswoman and her family yesterday blamed one of his uncles for the killings.

The 17-year-old denied taking part in the killings but surprisingly withdrew his application for bail.

He is being held in custody with four men for allegedly killing Mirriam Khoza, 45, her two teenage sons Karabo and Tsaona, her brother-in-law Daniel Karfhia and her nephew Nadine Khoza, on Christmas Eve.

The teenager was arrested along with Sibongile Mabaso, 27, Goodboy Mabaso, Thabo Dikane, 18, and Barnard Dikane, 30.

They have been charged with five counts of murder, housebreaking and theft, and possession of an illegal firearm.

The teenager is related to three of his co-accused. He told the court that Goodboy and Barnard were uncles and that Thabo was a cousin. He said he had visited his relatives in Lethabong to spend Christmas there.

Taking the stand during the bail application, the youngster, who passed Grade 10 last year, said he was not involved in the crime.

He claimed that he saw his uncles and his cousin only on Christmas Eve when he went to visit them.

"The car was loaded with household goods such as sheets, dishes and plates and ornaments.

"They then asked me and my cousin Ditaba to off-load the stuff.

"That was the only time I was in contact with them," he claimed.

He told the court he was not afraid of the protesters gathered outside court baying for his blood if he was released on bail.

"The angry people live in Hartbeesfontein and I live in Meriting.

But despite this, he withdrew his bail application. His lawyer Rocky Modisakeng told the court that he had consulted the boy's father and that "certain considerations" had been taken into account.

Prosecutor Mirriam Tsale told the court that the crime occurred between 23 and 25 December.

Tsale said that Sibongile Mabaso had confessed to the crime and said all five of them were guilty of murdering the family and of stealing household goods and Khoza's vehicle.

"Sibongile confessed that all were killed two days before Christmas in the evening," Tsale said.

"The goods were off-loaded the following morning on the day before Christmas.

"Later in the day Barnard drove back in the Navara to Khoza's house to get more stuff from the house."

The case was postponed to next month for further investigation and for the accused to plead.