former minister had little joy in her life 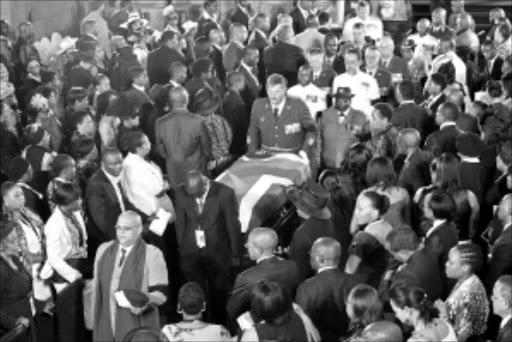 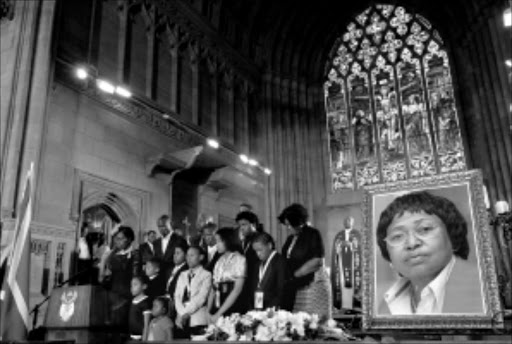 President Jacob Zuma told mourners who packed the Catholic Cathedral of the Sacred Heart in Pretoria yesterday to give Tshabalala-Msimang a hero's send-off.

"We say with no fear of contradiction that she remains an undisputed hero of our struggle, who dedicated her life to the ideal of a free and democratic South Africa.

"Some of her fiercest critics cannot claim to have achieved even a quarter of what she has contributed to this country," Zuma said.

Tshabalala-Msimang has been criticised for her controversial stance against antiretrovirals, instead promoting nutritious eating for people living with HIV-Aids.

Zuma said Tshabalala-Msimang had little joy in her life because of her decision not to surrender until South Africa and its people were free from racist oppression.

"Today we are called on not just to mourn her passing but to celebrate a life that has unreservedly been dedicated to this country and its people."

Zuma said the fight against poverty and hunger must be intensified in honour of the late former minister.

"We must prioritise nutrition programmes and promote the general health and well-being of our people," Zuma said.

Tshabalala-Msimang died last week after complications from a liver transplant she underwent in 2007.

Father Phumlani Masuku told scores of mourners that Tshabalala-Msimang had had the opportunity to prepare for her final journey by receiving Holy Communion a week before she passed away.

Some of the mourners were brought to tears when an emotional tribute, written by Tshabalala-Msimang's husband Mendi Msimang, was read.

Part of the tribute said: "My heart swells with pride at the mention of your name, but your departure has left a void in my heart. You were not just my wife and friend but a comrade in arms.

"There will never be moments when I hear your sweet voice in the middle of the night saying "Mendi cuddle me".

"When your coffin was brought to my house I could not help but think about the past weeks together before your departure. You had this incredible ability to shield me and the children."

The message from the Mandela family was short: "I, Graca and the family send our deepest condolences to the family. No matter what, we can never prepare ourselves for this. You are in our thoughts and prayers."

In his message Mbeki said: "I was privileged to walk this road with Manto since 1964. To some of us this sad day stands as a beacon. We were privileged to have her among us as we walked the hard road to freedom.

"She is the tried and tested cadre of our movement. We are convinced as she was that victory is certain."

Throngs of people who could not enter the packed church yard for lack of accreditation braved the scorching sun standing all around the church yard.

At the main gate, National Association of People With Aids members wore T-shirts inscribed with "Nutrition For Life" on the back.