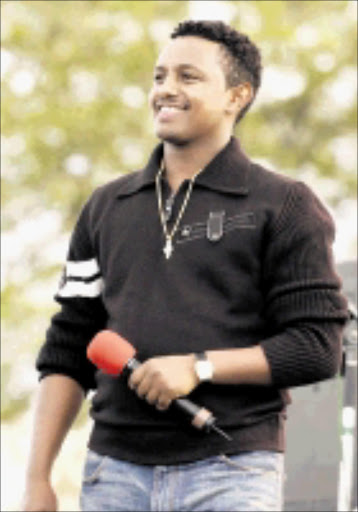 ADDIS ABABA - When Teddy Afro leaps onto the stage the crowd goes wild, clapping in the air and singing along with the man seen by many as the voice of Ethiopia's conscience.

ADDIS ABABA - When Teddy Afro leaps onto the stage the crowd goes wild, clapping in the air and singing along with the man seen by many as the voice of Ethiopia's conscience.

Fresh from his prison cell, the singer known as Ethiopia's Michael Jackson delighted tens of thousands of fans with his benefit concert for street children on Sunday.

"He was in jail for more than a year because of his songs. He wants democracy and freedom for us the Ethiopian people. We love him," shouted Alorachew, a student attending the show at the capital's sports stadium.

"Last time we saw him it was two years ago. He's a great artist, different from the others. He always comes with new things," enthused Sammy, a computer engineer who came along with a bunch of friends.

Next to him and slightly the worse for wear, Fredo, a young Ethiopian living in the US, confided: "I missed Teddy a lot. He's the best in Ethiopia".

The singer, whose real name is Tewodros Kassahun and who is seen as close to Ethiopia's opposition, was sentenced to six years in prison and a heavy fine for manslaughter after a 2006 traffic accident left a homeless man dead.

The supreme court reduced his sentence on appeal in February and he was freed in August. He has always protested his innocence, saying he was not even in the country then. For his return to the stage Afro decided to take up the cause of street children and beggars, who throng the streets of Ethiopia's cities.

All proceeds from the concert will go to an Ethiopian NGO, El Shady, which looks after street children.

"There are a lot of people. It is even more successful than we had hoped," said Addis Legesse, Teddy Afro's manager and one of the organisers of the concert.

Afro's goal is to ease the hardship of tens of thousands of the country's poor children, he said.

"200000 people are begging in the street in Ethiopia, people able to work, so we have to organise them and take them out of the street. We don't want to be seen as a begging nation," Legesse said. - Sapa-AFP