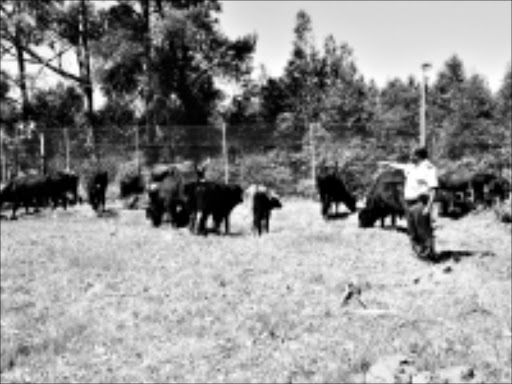 FREE TO GRAZE: Cattle recovered by a police patrol in northern KwaZulu-Natal this week after surprising a gang of stock thieves. Pic: SUPPLIED

LIVESTOCK owners in northern Zululand now patrol their area day and night to guard against thieves.

Villagers at Mpukunyoni in Mtubatuba say their livestock is being stolen daily.

They fear that a "known gang" is behind the theft.

Traditional councillor Qhina Mkhwanazi told Sowetan yesterday that stock theft was getting completely out of control.

"It's not only goats, but cattle as well. Actually, this is not a new problem, " Mkhwanazi said.

"It has been going on for a long time but it has got worse. We have held many meetings, but nothing has helped."

Mkhwanazi said what was even more heartbreaking was that the criminals were getting away with their crimes so easily.

"They hide the livestock in a bush, called Nkonjane, near Hluhluwe, where we can't get access to because the bush is so thick and dark."

The local chief, Mzokhulayo Mkhwanazi, said they were trying their best to rid the area of crime.

"I am hurt because other than being an inkosi I am also a community member.

"I share the pain of the people, losing what is rightfully theirs.

"There's an area that has been identified as a hiding spot for the gang.

"They also steal cars, furniture and hide it there," he said.

On Wednesday the chief met representatives of the provincial department of safety and liaison in a bid to find a lasting solution to the stock theft problem.

Mkhwanazi said the main cause of the thefts was that there was no police station in the vicinity where the criminals operated.

"There's only one police station in Mtubatuba and when police are called it takes them more than an hour to come here - and by the time they reach this area, the suspects are long gone and in hiding."

Meanwhile, the police at Ekhombe in Nkandla have urged community members to come forward and identify their livestock.

This after a detective's recovery of stolen livestock over two days.

Police spokesperson Inspector Mbongeni Mdlalose said 23 goats were recovered on Wednesday morning near Ekhombe and 21 head of cattle in the Ntingwe area early on Tuesday.

"The police were patrolling when they came across the herd of cattle being driven by unknown men. When the approached the men ran away.

Community members who have lost livestock are urged to contact Captain Sikhumbuzo Mnguni on 073-492-8344.