Peaches on the beaches 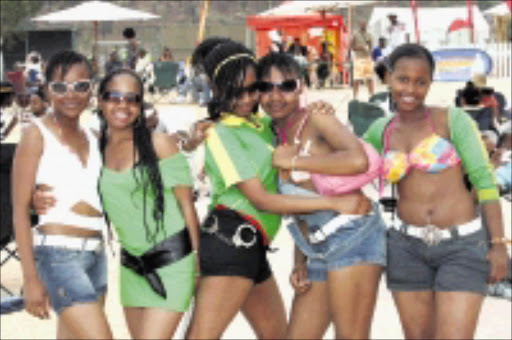 The popular annual Gauteng Beach Party has now been confirmed for October 3, and already diehard fans are making their thoughts known on Facebook.

The popular annual Gauteng Beach Party has now been confirmed for October 3, and already diehard fans are making their thoughts known on Facebook.

The beach party, which took place in Soweto until last year when the venue was changed to Coronation Park in Mogale City - and changed its name from Soweto Beach party to Gauteng Beach Party - is already a hit on the net.

And out of the 15000 people who have confirmed that they will attend the party, 5000 have done so through Facebook alone.

And not only that, they are posting comments on the Internet. Some of the Facebook comments are as interesting as they are weird.

While others are just looking for fun, people like Hotlezz Tsime said they were looking for something more serious at this year's party.

"Maybe I might even find a husband this time around," wrote Tsime.

There is even a following from beyond South Africa's border.

"I hope it's gonna be great," wrote Mohammed Sanusi Bah from Venezuela.

Mpho Makheta, the organiser of the popular party, said Facebook has played an important role in terms of bookings and spreading information about the party.

The Coronation Park Dam will be transformed into an urban beach with 400 tons of soft, shiny golden beach sand.

Expect sumptuous shisa-nyamas, smooth cocktails, sexy beach babes, hot and slinky beachwear, spectacular fireworks, 30 DJs and artists and the who's who of Mzansi at the party.