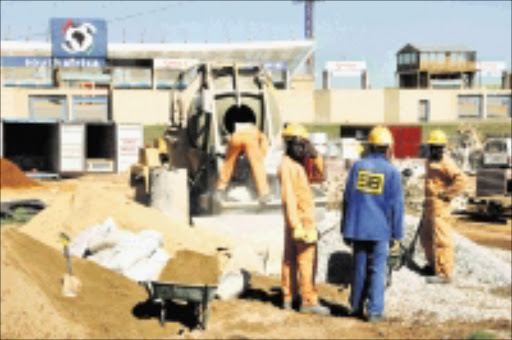 JOSEPH Moloto works overtime, mixing concrete and hauling heavy metal pillars at a 2010 Fifa World Cup stadium site in Johannesburg, in a rush to complete work for an event he has no enthusiasm for.

JOSEPH Moloto works overtime, mixing concrete and hauling heavy metal pillars at a 2010 Fifa World Cup stadium site in Johannesburg, in a rush to complete work for an event he has no enthusiasm for.

Wage disputes and feelings of exclusion have seen morale dive at sites where workers hammer together South Africa's World Cup dream in a struggle to survive.

"The employers really do not care for us. They want to pocket all the money," Moloto says.

The exhausted 60-year-old is one of thousands who embarked on a strike that ended yesterday when bosses agreed to improve their wages by 12percent, one percent less than unions demanded.

With years of experience, Moloto feels exploited in an industry that dips with ease into the large pool of unemployed labourers looking for a job. They feel it is the pressure to deliver on World Cup promises that led to the first successful national construction workers' strike.

"This is a very labour-intensive industry, yet no one can survive on what we are getting paid," says Moloto.

The migrant worker from Mpumalanga says he earns an average of R1200 every two weeks.

He says the pay does not compensate for hours of hard labour they put in to get the stadiums delivered on time.

Moloto's day begins at 4.30am when he wakes up in a hostel dormitory to prepare for a train ride to the construction site at Soccer City in Johannesburg, where he has worked since 2007.

"Our shift starts at 7am and we can go on until 2am the next day," he says, "as employers push for deadlines."

The father of six school-going children sends most of his meagre earnings to his unemployed wife back home.

The logo on the workers' blue overalls reads: "I am proud to be building Soccer City for 2010."

But Moloto is nonplussed by the world's most watched sporting event.

"I am not proud at all. The construction industry has not been good to me. We are unable to feed ourselves, so why should I be proud?" he says.

The National Union of Mineworkers-led strike saw 70 000 construction workers downing tools at five World Cup stadiums that are still being built for the World Cup. - Sapa-AFP