Nightmare for boy who saw his parents blown to pieces 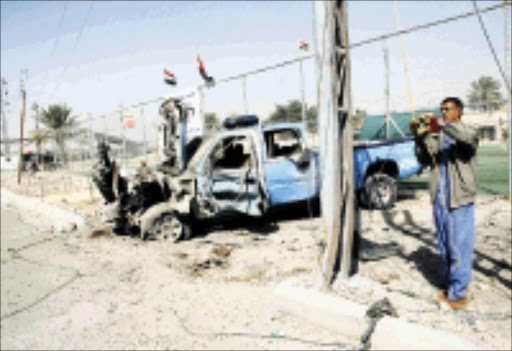 MANGLED AFTERMATH: A man fixes electrical wires next to a destroyed police patrol car in Zafraniyah in southeastern Baghdad, Iraq, on Saturday. The patrol car was hit by a road side bomb and three police officers were hurt as well as three bystanders. 28/02/2009. Pic. Mahmoud Badri. © AP.

Sometimes, in the dark, he silently attacks the boy next to him in a tiny Baghdad orphanage where 33 boys sleep on cots or on the floor.

Salah, who saw both his parents blown apart in a car bomb blast two years ago, can never be left alone at night, said Ahmed Abdul-Baqi, the night shift social worker at the Safe House, a private orphanage in Baghdad.

"He wakes up in the night and tries to hit or even to choke the boy beside him," said Abdul-Baqi.

His hands always trembling and unable to speak properly, Salah is one of an army of uncounted orphans left behind by six years of sectarian slaughter and insurgency that was unleashed by the US-led invasion of Iraq.

As violence finally fades and US troops prepare to withdraw, sociologists and health experts say the children's reactions to such trauma could threaten Iraq's fragile calm just as it needs stability to rebuild.

"The issue is not a place where they can sleep and eat," said psychiatrist Haider Abdul-Muhsin.

"More important than that is whether they can find peace inside themselves.

"It is to be expected that when you have a high percentage of orphans and deprived people in Iraq, you will have a corresponding increase in crime and violence in the future."

No one knows how many children had parents torn from them by the war, or the conflicts waged by former leader Saddam Hussein. Some had their fathers hanged or shot under Saddam.

Samira al-Moussawi, head of the women's, children's and families' committee in parliament, said if there are a million widows in Iraq, there are probably three million orphans.

The number of orphanages by comparison is small, and scant money is spent on the children by the government.

Each orphan registered with the Labour and Social Affairs Ministry - and not many are - is allocated about $12 (R126), a month.

"These amounts are not enough," Moussawi said.

Sociologist Fawziya al-Attiya said every dollar spent on the orphans should be viewed as an investment in Iraq's future.

Drug-taking, unemployment, and suicide bombers were all a consequence of war, and the orphans it leaves behind are "easy prey" for terrorists and criminals, she said.

"We urgently need to invest money to care for those orphans.

"We will double our returns by building society," Attiya said.

At the Safe House, initially set up by a Kurdish agency in 2003 but abandoned to the care of its managers and volunteers when Baghdad became too violent, 33 boys aged six to 16 share 73square metres spread over two rooms, on two floors.

There, in Baghdad's sprawling Sadr City slum, they sleep, eat, study and play. The air inside is rank: a pool of raw sewage glistens outside the front door.

Each room has seven beds, where the lucky ones sleep.

The orphanage owner wants the property back and staff have been given notice to clear out within three months: they do not know where they will go.

"If we cannot find another house, we will camp in al-Firdous square," said Samir Jassim, assistant to the orphanage manager.

"Hopefully an official passing by will see us and find a solution for us."

The orphanage depends on private donations. Sometimes it gets help from nongovernmental organisations but it receives no government funds and is not registered with the Labour and Social Affairs Ministry.

"It was too complicated for us. This is easier," said Jassim.

Social workers say they pay special attention to children like Salah whose parents were blown up in bombings. A policeman took care of him for two months after his parents were killed near a mosque.

Despite his problems, social workers say Salah has made progress: "When he first came to us, he could not speak at all, affected by the shock. Now he is slowly beginning to talk," said Jassim.

Saif Salah Hisham, an eight-year-old boy, also lost his parents to an explosion. He was four at the time.

"I feel comfortable in this house," he said.

"I say to the terrorists who killed my parents, 'God forgive you.' I want to be a policeman when I grow up to protect my country and stop the terrorists from killing people." - Reuters