J&B Met was a picture of glitz and glamour 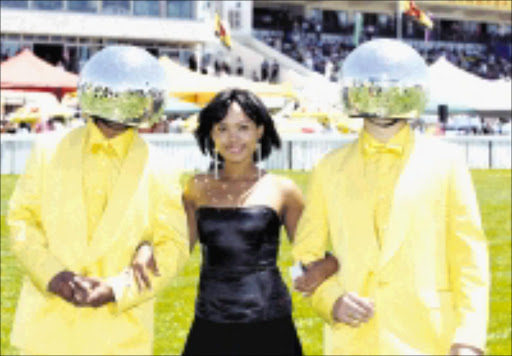 STYLE COUNCIL: Amanda Tuso is flanked by the glitter boys during the J&B Met held at Kenilworth Racecourse in Cape Town on Saturday. 31/01/09. © Gallo Images.

If you decided to give the 32nd annual J&B Met a miss because you thought the co-ordinators of the most glamourous event of the year no longer had a couple of aces up their sleeves, then you were wrong.

The Kenilworth racecourse, home to one of the biggest parties in the land, was the only place to be in Cape Town on Saturday.

Some ladies were so scantily dressed that they gave an impression of wearing two colourful pieces of chiffon held together. Others were overdressed for the sunny weather, a refreshing departure from the usual all-seasons-in-one-day Cape weather.

Hats came in all styles and shapes, barely affording the wearers a chance to display their creations - thanks to the wind.

We negotiated our way to join the throngs of celebs, wannabes and hangers-on who were absorbed in their 15 seconds of fame.

Granted, everyone had made an effort to look smashingly stunning. Tshedi Mholo of Malaika wore a stunning black number with a small feathered skull cap. Her partner in crime, Bongani Nchang, wore a dark, subtly floral suit and was Mr Elegance himself.

Metro FM's Penny Lebyane was in a rose pink number and her classy hairstyle completed the look.

Another vision was Sbu Leope who wore a stunning grey suit. Having lost unwanted pounds, he is maintaining a sleek look. On his arm was the beautiful Terry Pheto.

Tumisho Masha was the picture of cool and smooth, with a cigar dangling from his perfectly manicured fingers.