fond farewell for the people's doctor 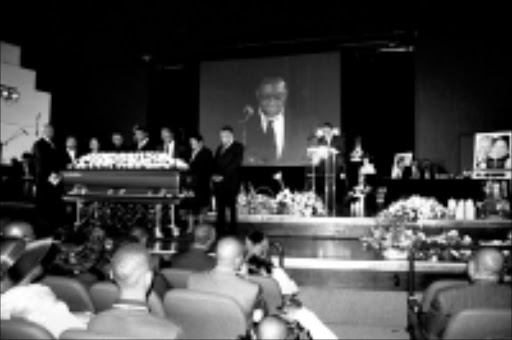 To the world the late Dr Nthato Motlana was a struggle hero and entrepreneur - but to his grandchildren he was their doctor first and then their grandfather.

Motlana's grandchildren paid a warm tribute to him at his funeral service in the Wits Great Hall on Saturday.

"When we had a headache or stomach pain, we went to him. The thought of medication and needles sent shivers down my spine," said Malaika Motlana.

Motlana always had a professional demeanour and enthusiasm for life, she said.

One of the grandchildren also described how Motlana told her not to give up on anything in life.

"I had failed my honours degree studies and he sat down with me and told me not to lose hope because ultimately I would pass. I will miss such kind words from him," Refilwe Motlana-Moroka said.

Motlana succumbed to prostate cancer last week. He was 83.

In his eulogy Tutu praised Motlana for "his dedication and tireless efforts to better his community".

"Motlana served his people. He used to be my family doctor and never asked for a cent from us. Let us recoup that culture of service of the struggle days and serve and not be selfish," Tutu said.

Motlanthe said: "Motlana's life defied easy categorisation and knew no limits. He was friendly and down to earth. I admired his ability to set himself free from the clutches of poverty."

Zuma said the ANC was losing its elders: "We have to thank our nation's founding fathers and mothers such as Motlana, Walter and Albertina Sisulu, Govan Mbeki, Billy Nair and countless others who made us proud to be South Africans."