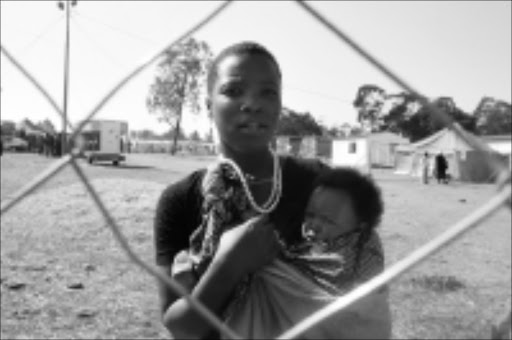 CROSSFIRE: Narcisa Macamo, 20, with her baby, Lurdes, witnessed the fracas yesterday at the camp for victims of xenophobia in Glenanda, south of Johannesburg. Pic. Antonio Muchave. 17/07/08. © Sowetan.

A camp for displaced victims of xenophobic violence erupted into chaos yesterday when migrants threw stones at police who had come to free four security guards held hostage overnight in an office.

The police returned the fire with rubber bullets at the temporary shelter in Glenanda, south of Johannesburg.

"They had to fire the rubber bullets to disperse them," police spokesman Superintendent Lungelo Dlamini said.

The gates of the shelter remained locked yesterday and residents complained that they had not received food because the relief agencies were not allowed to enter.

Some residents said that the hostage-taking was a deliberate act to stall the reintegration process .

A Zimbabwean woman, who did not wish to be named, said Congolese immigrants were "bullies" and were intimidating other residents into not applying for access cards to the shelter.

She said some of the immigrants were refusing help from the government to force the United Nations to help them leave the country.

"Some of the Congolese are not even genuine xenophobia victims. They came here thinking that they would be resettled in Canada or the United States."

Bruno Lukamba, a Congolese immigrant, said he did not feel safe among his own people because his family was threatened for accepting the card.

Tshiebue Kanangila of the DRC vowed never to register for the access card. He said he did not want to be reintegrated with South Africans.

"We want to go to another country where there is respect for human rights," he said.

Signet Mashego of the Independent Development Trust that facilitates the reintegration process said pandemonium was a "daily phenomenon".

"This is the biggest and the most challenging camp that we have worked in," Mashego said.

He said the inhabitants "resisted government intervention" and scuffles over the distribution of food and clothes were common.

He said there was a lack of "cooperation and communication" between the immigrants and the government.

"There is a need for a united voice from the government. A political decision is required.

"Leaders must give direction on what should be done," said Mashego.

Residents locked up the guards because they believed they had come in to kill a peace marshal.

However, Theuns de Lange of Interactive Security laughed off claims that the four hostages were not security guards.

"They were sent here to break up fights," De Lange said.

No injuries were reported but 10 residents were arrested and will be charged with public violence.