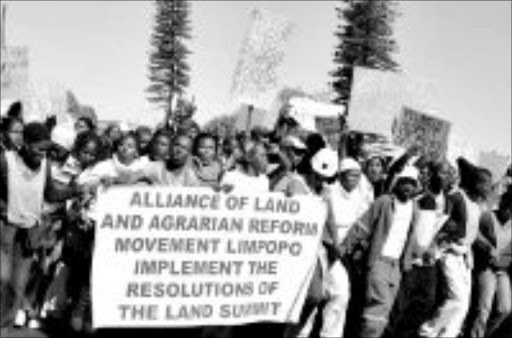 Angry villagers from Mandaagshoek at Sekhukhune in Limpopo are fighting the expanding of Anglo Mine without informing the community and bringing foreing securities. They told Sowetan that if the Department of Mineral and Energy and Premier Sello Moloto are not acting are going to take the law in to their hands. The marchers were submitted their memorandum to the Department of Mineral and Energy and Primier Sello Moloto in Polokwane on Thursday (yesterday). PHOTO: ELIJAR MUSHIANA

Angry residents of Maandagshoek near Burgersfort in Limpopo are accusing mining companies in their area of pumping out "precious" ground water.

The residents, who say the mining companies are engaged in illegal activities in their area, took to the streets of Polokwane yesterday.

They marched to the offices of Anglo Platinum, the Department of Minerals and Energy and to Premier Sello Moloto's office to demand better living conditions.

Mining has been taking place in the area for several years. It includes operations by Anglo Platinum, African Rainbow Minerals and Genorah Resources.

The residents say the mining companies have brought them suffering instead of benefits.

"Our ancestral land has sustained us for generations and is richly blessed with natural resources, but we do not benefit from these at all," community leader Emmanuel Makgoga told the protesters.

He said several meetings held to resolve the community's problems had failed to yield any positive results.

Makgoga said since the mines started operating, they had "completely destroyed the ground water, a resource on which we depend."

Anglo Platinum spokesman Simon Tebele said they respected the rights of the community where they operated. He said residents could discuss their concerns with his company.