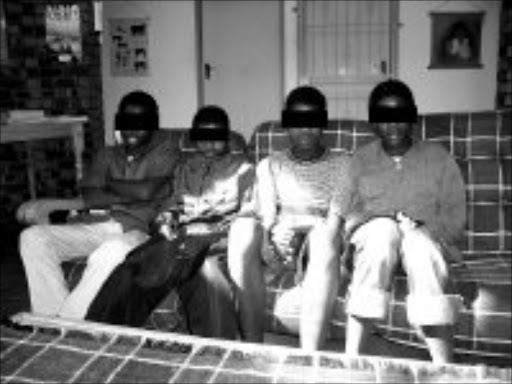 RELIEVED; Four of the boys who were rescued from the farm by police yesterday. © Unknown.

Mpumalanga police have helped transport children as young as nine, who were employed as labourers by an unscrupulous farmer during the school holi- days, back to their homes.

The children were part of a group of more than 40 labourers who had been recruited from Mafikeng in North West to work on the farm for a promised R35 a day.

They worked on a bean farm known as Streala Farm, owned by Piet Marais. The farm is situated between Delmas and Leslie.

An investigation by Sowetan revealed that the children were recruited during the school holidays.

They said the farmer refused to pay them their full wages and reneged on an undertaking to transport them back home after the March holidays.

Among the group were two Molefe brothers David, 9, Olebogeng, 10, their cousin Mojava Molefe, 13, and a friend Oratile Marumo, 14, who are from Modimolle village in Mafikeng.

The children claimed that that when they arrived on the farm Marais cut their promised pay by R10 to only R25 a day.

"After we insisted on being paid in full he pushed it up to R27, but deducted R15, saying it was for food," Marumo said.

"He served us offal and porridge daily. The deductions were made even if one had not eaten the food."

Mojava said the farmer was notorious in the area for employing children and foreigners.

"He pays very little and when you complain he fires you," Mojava said.

The child labourers said 15 of them shared a four-roomed house.

"The farmer woke us up at 4am to go to work until late in the evening," Mojava said.

Each time they demanded full pay and transport to go home the farmer told them they had to wait until their contracts had expired.

"We did not sign any contracts," the children said. "We only had a verbal agreement that he would take us back home when schools reopened. He failed to do that."

Marumo said they were advised to report the matter to the local police station and they did.

"The police contacted the farmer, who promised to pay us and to take us back home," Marumo said.

Constable Ntombifuthi Mashiane of the Delmas police said the police had transported more than 40 child labourers back to their homes in North West. Four others were being kept at a place of safety in Gauteng.