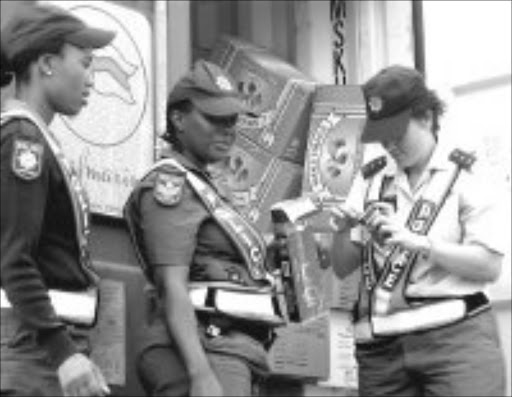 TOUGH OFFICERS: Women in uniform seized more than R100 000 million worth of counterfeit cigarettes at Durban harbour in six containers. Some of the cigarettes were about to be dispatched onto the market. Pic. Mhlaba Memela. © Sowetan.

As the country commemorates 16 Days of No Violence Against Women and Children, a unit of courageous women police officers in a joint operation at the Durban harbour, netted contraband cigarettes worth more than R100million.

Police said the consignment was from the Middle East and it was still not clear whether it was in transit or destined for South Africa.

It is believed the contraband, which was stashed in six containers, is the work of a syndicate of smugglers with links to the Middle East.

No arrests have been made, but police said they were following strong leads and are questioning the crew on board a ship bound for the United Arab Emirates.

Police spokesman Superintendent Thembakazi Mase said the operation was well planned and began a month ago.

"Our investigation was based on the intelligence that several containers of counterfeit cigarettes were destined for our shores.

"And the team detected two containers with a total of 440 master cases of the Chelsea brand cigarettes.

"We had information that there were six containers but discovered four others loaded on the ship that was about to depart.

"The captain of the ship was requested to stop and the four containers were found.

"Durban harbour is the largest trans-shipment port in Africa and it's possible that it was used as a thoroughfare to transport the cigarettes to the neighbouring countries," said Mase.

Police said South Africa was losing more than R1,2billion a year in revenue through contraband cigarettes.

This year alone police have netted R250million worth of contraband cigarettes.

Mase said the operation coincided with the initiative of Durban harbour women network, where 204 women in uniform were employed and deployed.

"We are also happy that the operation coincided with the 16 Days of No Violence Against Women and Children."