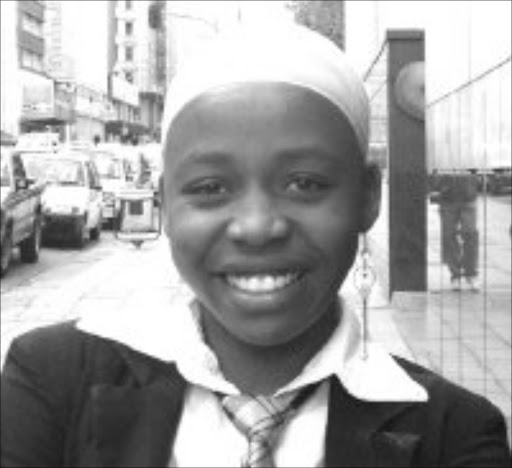 RESILIENT: Charmaine Ntuli says her strong belief in herself helps her to deal with resistance. Pic. Zweli Mokgata. © Sowetan.

One of the toughest questions that young people ask themselves is how can I do it, and Charmaine Ntuli, the 22-year-old chairman of the Black Management Forum (BMF) at the Community and Individual Development Association (CIDA) student chapter, says there is a way.

Though still in her first year of a Bachelor in Business Administration degree at CIDA city campus, Ntuli has been through many hardships that have prepared her for her role as chairman of the BMF student chapter.

"I graduated from matric in 2003 and the next year I wanted to attend RAU to study commerce, but couldn't do it because of financial difficulties," Ntuli says.

"I managed to get a bursary to go to Midrand Graduate Institute, but I only stayed for half the year for financial reasons. I was stuck at home for a while, but I managed to get a job in business at a process outsourcing firm."

She stayed at the company but saw no room for growth, and left in March 2005 when she joined a marketing firm.

"I stayed for a while, until I just stopped everything in September. I was very frustrated having been through some [tough] times. My mother was a teacher and told me about CIDA. I registered and haven't looked back since," Ntuli says.

At CIDA Ntuli was merely looking for a support system for aspirant entrepreneurs when she stumbled on the BMF.

"I just wanted to be a member, but at the yearly meeting when we were preparing for the launch of the student chapter here, no one stepped up. I ran unchallenged and became the first female chairman in the history of BMF student chapter.

"I've had a bit of resistance as chairman, but with my strong belief in myself I was able to deal with [it], and I'm excited about the future," Ntuli says.