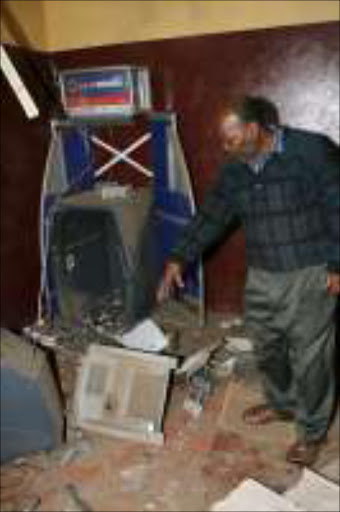 20070109lnx news: ATM blusted in Soweto,East Rand and midrand their were no injuries.among the ATM that were robbed was Hillbrow and the three suspect were arrested on the spot Photo:Lucky Nxumalo. FM. 19/1/07. PG 20. Chris Stals.

A security guard, 36, burnt to death when a colleague threw a burning paraffin stove at him in a fight over stolen cash.

But he managed to gasp a statement to the police minutes before dying in his hospital bed.

The drama was sparked by the bombing of the Standard Bank ATM in GaMaphalle village, Limpopo.

It started when four robbers, who are still on the run, bombed the ATM a few metres from a filling station at Maladjie shopping centre at about 2.30am on Sunday.

The thugs - one of whom was wearing a police uniform - fled in a white Venture with an undisclosed amount of money from the ATM - but they left some cash behind.

The murdered guard had insisted that he and his colleague return the money left by the bombers, but his colleague disagreed and assaulted him.

He threw a burning paraffin stove at the guard and blocked his exit from the room they shared.

The burning guard ran towards his attacker and embraced him until he too started burning.

The men ran for help, but the victim collapsed, burnt beyond recognition.

He died yesterday morning at GaKgapane Hospital and a case of murder has been opened .