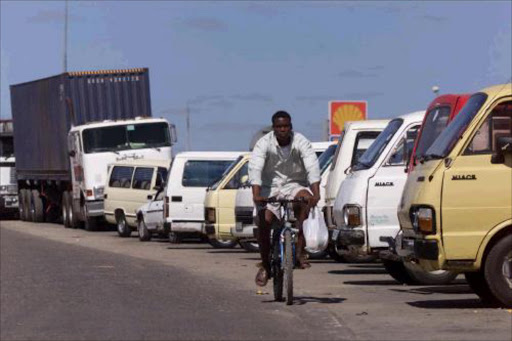 Taxi drivers pick up illegal immigrants at remote spots near the border and smuggle them to Polokwane and Gauteng, being careful to avoid the N1 highway because it is patrolled by the police.

Taxi operators charge as much as R200 to take an illegal Zimbabwean immigrant to Polokwane.

Justice Pitso, Limpopo's roads and transport MEC, yesterday said the scam was uncovered at a roadblock at Beit Bridge at the weekend.

"We found the scam had been operating for some time," he said.

"We discovered a group of children from Zimbabwe under the bridge. They were to have been transported to their [Zimbabwean] parents in Gauteng."

Pitso, who was appointed MEC last month after a cabinet reshuffle, said the police impounded several taxis in the Beit Bridge and Musina areas for being involved in the smuggling of illegal immigrants.

He said the smuggling of illegal immigrants would be discussed in the legislature and taxi operators who broke the law could expect to be dealt with severely.

"We will not hesitate to take taxis off the road when we feel their owners are acting illegally," Pitso said.

More than 50 taxis were impounded in the Moutse area for operating without permits or licences.