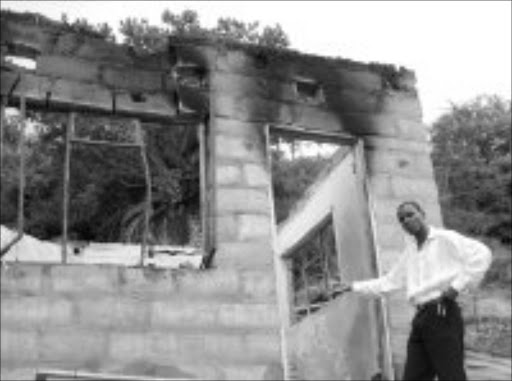 FIRE TRAGEDY: Sowetan reporter Riot Hlatshwayo next to the burnt out shell of the house. Pic. Alfred Moselakgomo. © Sowetan.

A couple in Mpumalanga, their two children and a niece were burnt beyond recognition on Wednesday night when their house caught fire.

The five were sleeping in a room of their home in Pienaar, near Nelspruit.

Neighbours said yesterday that they heard a big explosion at about 9pm and thought it was the sound of an electric transformer exploding.

"We ran out to investigate and saw the house on fire. We tried to extinguish the fire but it was too strong," said Phindile Shabangu, a neighbour.

"No one was screaming when we arrived and we thought there was no one inside, but after the fire had died down we found all five people burnt beyond recognition," she said.

Everything in the house had been destroyed. The family is reportedly originally from Tzaneen, in Limpopo, and arrived in Pienaar in June.

The dead will be named after their relatives have been informed.

Captain Raymond Nxumalo, of the KaNyamazane police, said the police found an illegal electricity connection from a neighbour's house and suspect that it caused the fire.

Nxumalo said a forensic team from Pretoria had been called in to identify the bodies.

He said the registration plate of a vehicle parked on the premises would be used by the police in their attempt to trace the family's relatives.