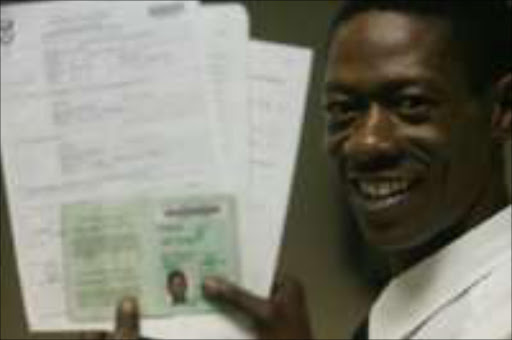 Thanks to Sowetan, a man who was a "woman" for nearly 20 years has been declared a man again.

Zacharia Senokoane's story is not about a reversed sex-change operation, but another tale in the mounting list of bizarre ID blunders by the Department of Home Affairs.

Senokoane was given an incorrect identity number by the notorious department. His gender was given as female - and no amount of effort on his part could convince the department he was who he said he was.

He could not even marry his common-law wife because, according to the staff at Home Affairs, he was a woman. His two sons bear their mother's maiden name because their parents could not legally marry.

Senokoane had to produce a medical certificate to prove that he was indeed a man.

But after his bank account was frozen because of the continuing bungling, Senokoane felt he'd had more than any man, or woman, could take.

In desperation, he approached Sowetan and a day after his story appeared an official from Home Affairs paid Senokoane a visit at his work and took down his details for a new ID.

At the weekend Senokoane said: "I am so grateful. Now I can do things I could not do before."

Because his bank account was frozen, Senokoane and his family faced an unhappy Christmas. He could not buy a uniform for his first-born son, Thabang, who starts school next year.

"Now I can see a better future for my family," Senokoane said.

He said he would marry his wife of six years in the new year.

"And I am going to invite you guys," he told Sowetan.

Senokoane, who last week said he felt as if he were unemployed because of his financial woes, said: "Now I can get to my money, which has been in the bank for the past two months. And I know where my salary will be going at the end of the month."

Home Affairs said Senokoane's new ID would be delivered to him by today.