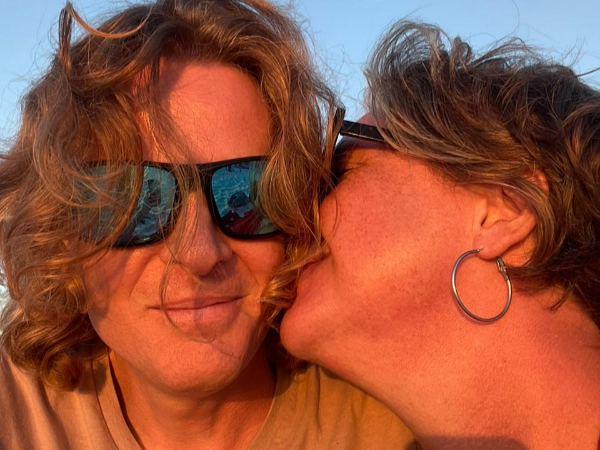 Chris Kalshoven and Cheryl Harvey last met about 20 years ago in London where they worked together. Their friendship was rekindled last year after Kalshoven commented on a Facebook post during the height of the Covid-19 pandemic.
Image: SUPPLIED

A comment on a Facebook post from a friend she last saw 20 years ago has led to a friendship turning into a fully fledged relationship, culminating in the man asking the woman to marry him this weekend.

The woman’s eight-year-old son has accepted Chris Kalshoven’s request to be his stepfather.

When it was explained to the boy that Cheryl Harvey would have to marry Kalshoven for him to be his stepfather, his response was: “But I am not getting a second brother.”

Harvey, from Cape Town, explained she last met Kalshoven 20 years ago while they were both working in London.

Kalshoven was living in London with a group of friends at the time.

“The two of us worked together, we were very good friends, we travelled all over England, we went to music festivals together,” Harvey said.

Wedding gowns fit for a princess

The drama at the jubilant wedding ceremony of Skeem Saam’s Mapitsi (Mogau Motlhatswi) and Thabo Tbose Maputla (Cornet Mamabolo) was not courtesy of ...
Good Life
4 months ago

However, they lost touch when Kalshoven returned to SA and went to live in Musina, while she went home to Cape Town.

She said Kalshoven was not on Facebook for many years.

“Last year, I saw he commented on one of the posts from one of the friends. I sent him a message, we started chatting and we became very good friends.”

She said their friendship gradually developed into a romantic relationship. Kalshoven went to visit Harvey in January this year and returned in March after getting a job in Cape Town. He then stayed with Harvey at her home.

The plan, according to her, was that he would raise a deposit so that he could get his own place. But that did not materialise as she was “comfortable” having him at her home. She said her son had taken an instant liking to him.

Harvey said no date for the wedding has been set yet, as she wants it to coincide with a visit to SA by her sister and her husband, who are in Scotland.

Kalshoven's sister Lara Luis, who shared her brother's heartwarming chat with his future stepson on Twitter, said her younger brother had not been in a serious relationship 90% of his adult life.

She said he moved from Musina to Cape Town at 42, after an “online pandemic romance” with Harvey. Two weeks ago, her brother told her he wanted to propose to Harvey. She offered him a choice of one of her late mother's rings.

“I always had faith this would happen. I know my mom approves,” Luis said.