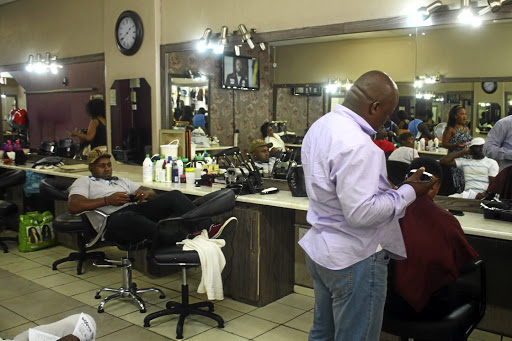 A doctor who works at a hair salon has been battling to find a job and has been working at the salon run by his wife in Pretoria.
Image: KABELO MOKOENA

A group of foreign doctors desperate to practice in South Africa have been forced to take up odd jobs such as guards or car wash hands.

At least 40 doctors, mostly from the Democratic Republic of Congo, who have passed the board examination and received accreditation from the Health Professions Council of SA (HPCSA) have been left frustrated after a two-year wait for internship at public hospitals.

Patients, meanwhile, are forced to stand in long queues at public hospitals waiting to see doctors while those working at the facilities complain of being overworked.

A 38-year-old refugee from the DRC, one of the doctors waiting for placement, told Sowetan his skills were being wasted washing cars while he could be saving lives in a hospital.

The man who asked not to be named qualified in 2016 to be placed at a public hospital as an intern but has been waiting ever since.

'Village poverty can be hurdled'

Scientist Maphanga is living example how odds can be overcome.
News
4 years ago

A letter from the HPCSA, which the Sowetan has, seen states that he passed the examination for Foreign Qualified Medical Practitioners at the University of Kwa-Zulu Natal on December 2 2016. He also obtained an endorsement certificate from the National Department of Health which is dated January 2017.

"When we apply we are told that there are no internship posts available for us," he said.

The man said he was ashamed to tell people that he was a medical doctor.

"I don't tell them because it is shameful. They won't believe that a medical doctor is doing that kind of job."

Another Congolese doctor Christian Kaniki, 33, said he worked as a security guard at a supermarket in Johannesburg. But he can only work night shifts as he's not an accredited guard.

"I'm a doctor. I love to help people and serve the community here. I can't go back to DRC. I'll be killed," he said.

The man said they were desperate to work: "I'm telling you it is hard to pay rent and feed yourself."

He said they had formed a strong network with other foreign doctors from other countries, including Cameroon and Nigeria, who are facing similar problems.

"We can consider placing foreign nationals only when each and every South African has been placed.

"And that will be done within available resources. No country in the world prioritises foreign nationals over its citizens," he said.

"Most of these professionals are in our country because their own governments are struggling to balance the scale between supply and demand for jobs."