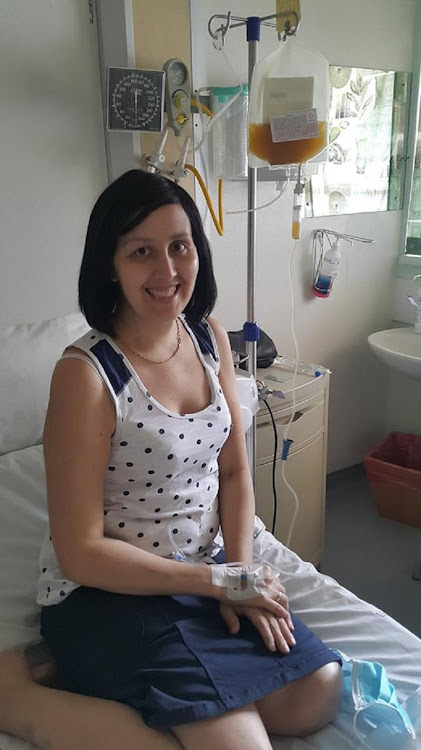 One donation of a whopping R200‚000 has helped Johannesburg paediatrician and mother of two‚ Kerryn Neilson‚ raise R1 million to help pay for a new chemotherapy drug that she hopes will help her beat a form of blood cancer.

Neilson‚ 32‚ from Midrand‚ has been diagnosed with Tcell acute lymphoblastic leukemia (T-ALL.) T-ALL is described as a fast-growing blood cancer which creates abnormal lymphocytes (white blood cells formed in the bone marrow). It can lead to anaemia and random bleeding.

She has spent the greater part of the last few months in hospital‚ often in isolation‚ unable to see her children‚ aged four and nine‚ according to BackaBuddy‚ the crowdfunding site. At home‚ she is prone to infections. Her children have had to learn to always wear face masks around her and wash their hands before touching her.

Her haematologist suggested a chemotherapy drug‚ Nelarabine. While it has been approved in America and Europe‚ it is not readily available in South Africa. However‚ they are unable to afford the treatment‚ estimated to cost around R2.5 million.

Doing everything she can to stay alive and protect her immune system‚ 29-year-old Megan Hunter didn’t expect to be openly mocked and laughed at‚ just ...
Good Life
4 years ago

“There is no guarantee that this drug will get me into remission‚ but my doctors feel like it is worth a shot and complete responses have been achieved with this medication in other patients around the world. Right now‚ there is nothing else that can be offered to me in order to achieve remission and it really is my last hope. If it works‚ I will be able to have a bone marrow transplant from a donor in the United States who has already been matched for me and this is the only thing that is potentially curative‚" Kerryn Neilson said.

With her husband‚ Sheldon‚ they resorted to a public campaign to ask for help in raising the funds she needs for treatment.

The couple's campaign on BackaBuddy went live on January 16. So far 443 local and international donors have responded‚ raising over R1 million - enough to order Kerryn’s first round of treatment. One anonymous donor contributed a single donation of R200‚000 towards the campaign.

“Initially it felt impossible. It is just such a massive amount. While crowdfunding on BackaBuddy we were also scrambling to come up with contingency plans‚ to take money out of the bond and our savings and retirement funds etc. Even while the donations were coming in‚ it just felt like such a big number‚ yet slowly but surely the fund has continued to creep towards the target. We would like to extend them our deepest thanks . . .We have been humbled by the amount of support that we have received‚" she said.

Zane Groenewald‚ BackaBuddy's marketing and public relations officer‚ said the Neilson's plea for help is the first medical campaign to raise over one million rand for one individual.

He commented: “With medical campaigns such as Kerryn’s raising over one million rand‚ we are reminded of both the resilience and generosity of the South African people in the face of fear and adversity. The manner in which the crowd responded in Kerryn’s time of need is truly inspiring."