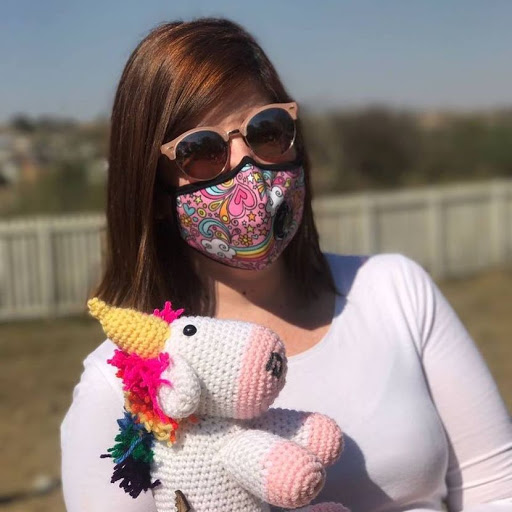 Doing everything she can to stay alive and protect her immune system‚ 29-year-old Megan Hunter didn’t expect to be openly mocked and laughed at‚ just because she was wearing a mask.

Johannesburg resident Hunter looks healthy but has severe Myasthenia Gravis‚ an autoimmune disease in which the body attacks the connection between nerves and muscles. Her medications weaken her immune system so she needs to wear a mask in public to reduce her exposure to germs.

She occasionally uses a cane‚ a hint something may be wrong‚ but people still stare at her.

The 29-year-old recently posted about wearing her mask in public: “As I was waiting in the queue at pharmacy‚ the young girl in front of me turned around‚ looked at me & started to laugh. She then turned to her mother/older sister & said: ‘you have to see the girl behind us wearing a crazy mask. What does she think this is?’

“The older lady very obviously turned around‚ gave me big eyes & immediately burst out laughing. For the rest of the time that they were being served‚ they kept turning to look at me & discussing me .... I wanted to cry.”

She said that she sometimes avoids wearing her mask now.

“I have definitely taken to not wearing it as often as I should as there are some days I just can’t handle getting odd looks.”

Hunter said: “Last week‚ when I flew to Cape Town some man asked if I thought I was Darth Vader as I was walking through to the exit. I just replied that I wish it was that‚ as he carried on walking and laughing.”

Kelly du Plessis‚ founder of Rare Diseases SA‚ said people with invisible illnesses often face stigma‚ as loved ones don’t believe they are ill and are instead attention-seeking.

“It is not necessarily that just because someone doesn’t look sick they are not going through anything.”

A lot of patients or parents of sick kids “feel they have to over explain themselves and defend themselves‚” said Du Plessis.

Hunter‚ who blogs about being positive through her illness‚ said the support from her Facebook has shown her how “amazing South Africans” are.

Her message to others is: “Please‚ be aware of those fighting a battle that you know nothing about. Ask questions before you judge. And take the time to teach your children about people that are different.”