Searching for solid ground and dad's heart and mind

Breakdown of parents' marriage turned my world upside down 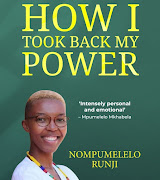 Image: Supplied Cover of Nompumelelo Runji's book - How I Took Back My Power

All my life I’d been telling myself stories to help me cope with reality. Sometimes, because my sense of self had been eroded and then actively suppressed to stay out of my mother’s line of fire, they were stories that had filtered in, landed and taken root in that empty shell.

When my mother left my father, I felt the to-be-expected conflict: how could I choose between them? But because my dad mostly disappeared from my world, my mother, fuelled by her bitterness, had every opportunity to exert her influence and advance her version of why she’d taken us and left.

In my early teens, I began to question my mother’s "because I say so" kind of answer. Make no mistake: that rejection happened silently. I’d learnt not to openly challenge these responses, which my mother would often resort to, but this left me with more questions than answers. Then, when I was about 15, there was an incident that firmly planted a seed of doubt about my mother’s integrity, particularly where my father was concerned.

While they were still together, one of the major sticking points between my parents had been religious conviction. I’d watched them fight over where my mother should or shouldn’t go to church, and I was particularly distressed by the discord when she had strongly opposed the rituals my dad would perform to protect and fortify our home against evil spirits. That included a ceremony in which a sangoma made small cuts into our skin using a razor; I still have the scars on my wrists.

My mother always claimed to be vehemently opposed to my father’s African beliefs, which for him sat comfortably alongside his Catholicism. Yet some four years after leaving him, she took my siblings and me to our grandmother’s one weekend and a sangoma came to the house to perform a protection and fortification ceremony on us. It was with utter disbelief that I followed my mother’s instructions to allow this man to cut my arms, wrists and legs with a razor and to rub a mixture containing chicken blood and herbs into the wounds. It stung terribly.

I was not impressed. For me, this was hypocrisy at its worst. How could someone who claimed to be a staunch Christian, and thus somehow more righteous than my father, be doing the very thing she had claimed was an affront to her conscience when he had practised it?

During a visit to my dad about a year or so after my mom had left him, he and I had a candid conversation about faith. I was 12 or 13, and he’d asked me to join him at his shrine to the ancestors: he wanted to announce to them that we’d come to visit and to ask for their blessing. I told him that although I respected his belief, I found it very difficult to speak to dead people. He took no offence. It was wonderful to feel free to express myself without fear of censure. If I’d known then that it would be the last time I would see him for many years, I wonder if I’d have taken the opportunity to engage with him more.

When I was older, I was able to articulate my resistance a little better: I struggled to accept that people whose lifeless bodies we had laid to rest in the ground could have any power over my situation, when they hadn’t been able to prevent their own demise. It was easier for me to believe in a being with superhuman and supernatural powers, one who could experience and then defy death, as the teaching about Jesus Christ goes.

Perhaps because my mother was a constant and domineering presence, I believed what she believed and rejected what she rejected, finding some security in these clear-cut edges. By subjecting us to a ritual with a sangoma, she’d shaken not just this firm ground, but also my trust.

If she could contradict herself so blatantly, was everything she had told me true? Was her version of the breakdown of her marriage accurate? Was she being honest about her role in it? I felt driven to unearth the truth about the fracture lines that had ended up shattering my world, so I looked to those who were in a position to either corroborate or discredit her version of events.

Whenever I broached the subject with the older of my mother’s sisters, her response was always perfectly scripted: "I don’t know what happened between your parents; all I can tell you is that your father really loved you, his children." Although it was vague, her response contrasted with my mother’s, raising more questions.

I wanted to hear my father’s side of the story. After reconnecting with him while I was at university, I tried to get him to talk about the divorce. These conversations over the phone were awkward and terse. Being old school, my father didn’t like having detailed chats over the phone. However, in the years following my studies I would visit him occasionally and, as I got to know him again, I could contrast and compare the things my mother had said or implied about him over the years with my own evaluations.

Far from being the inconsiderate, impatient, ever discontented person that my mother had characterised, he was kind, jolly and understanding. Time spent with him was energising, and I always felt validated in his presence. There was nothing demeaning in his tone or his words. And, despite everything, he never spoke disparagingly of my mother.

Many years later, when my mother and I had the major falling out after I’d given birth to my daughter resulting in a six-month silence between us, I had numerous conversations with my maternal grandmother about my parents and their marriage. She said my mom had left my dad several times. In the early years of their marriage, she had gone back home to report ill treatment by my father; in fact, each of them had gone to her to complain about the other.

I asked her bluntly, "In most cases, who was the culprit? Who was the aggressor?" She said it was my mother who caused most of the trouble.

"One day I told your mother that she should just divorce your father. I’d had enough."

My mother had followed her advice. What stood out for me was that it wasn’t only my dad who was the problem; my mom had contributed her fair share to the breakdown of their marriage. And I was not to blame.

It made me feel seen and validated to have my always-just-out-of-reach father’s attention, no matter that it was sporadic and usually orchestrated by me (I was the one who kept in touch and visited him).

In hindsight, I see a reflection of this in the validation I felt when I first noticed Sheffield looking at and, I believed, really "seeing" me when I sang in church. When he was leading our study of the quarterly lesson, he engaged with me and didn’t shut me down. Because he stood out from the crowd, having his attention felt extra special, like a gift to be treasured.

Since childhood, I’d found it impossible to believe anyone would love me as I am. I felt inadequate as me and constantly feared abandonment and rejection. But as I shone in the glory of Sheffield’s attention – when he chose to give it – being acceptable as "me" seemed possible.