Veteran bartender Travis Kuhn has profound passion for his craft

Hail to the king of classical cocktails 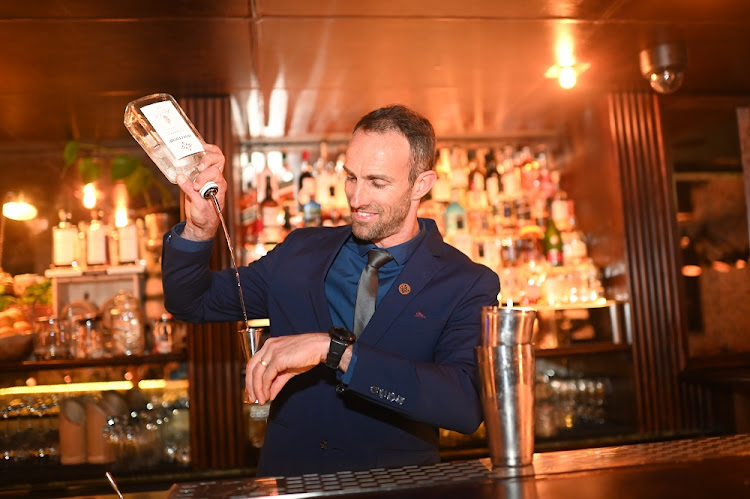 Gin is such a fascinating spirit. It has successfully shaken off its teacup reputation and landed in the hands of the cool kids.

On Monday evening I headed out to the Mesh Club, in Rosebank to celebrate the winner of the Inverroche Pioneers Competition, Travis Kuhn. Kuhn walks away with the title of Champion Bartender and his own limited edition hand crafted Pioneers Collection gin, which he created.

“When you first make your drink [as a bartender], I mean when you wander into a bar and think this is what I want to do with my life, you immediately get bitten by the fact that you’re making drinks for somebody else. And from that moment onwards I don’t care who you are, you have two ambitions in your life.

One of them is to own your own bar to make drinks for your own friends and the second ambition is to make something, you want make something like a tonic or a syrup, make a product. I mean in one year I have actually ticked off two life goals for myself,” says the bubbly Kuhn.

Another achievement we can be proud of in the entertainment space is that street-turned-studio artist Faith XLVII was announced as the artist that ...
Good Life
1 year ago

When asked on the challenges of creating a pairing menu for the attendees to taste his gin, the 22-year-bartending veteran had this to say;

“I am on a journey of reconnecting with classical cocktails that are made, that are drier, more bitter, using these kinds of principles. So, I like to keep things simple and make classical kinds of drinks whereby the liquids speak for themselves.

For a launch of something like this, the challenge was to create drinks that have a special element in them that people would look at it and go, wow,” he says.

The attendees were treated to a pairing menu as mentioned above. The first course was a refreshingly crisp plain gin and tonic paired with venison tartare served with soya and orange, smoked beetroot and Sorel cream. It was a crackling party in the mouth. It made you glad you came to the party.

Next was the pairing of the Carrot Bitterballen served with horseradish, ginger and Sultanese Vinaigrette. This was paired with the Big Zero cocktail which came in a glass teacup. It had dry ice contained in metal teabag. I had to dunk the 'teabag'  a few times to activate the smoke effect.

It's a fun cocktail that tickled the heart of a tea lover like myself. It tasted quite sweet and dense, there was a slight bitterness I assume was some citrus zest. It went well with the carrot bitterballan, though it was a struggle to finish. A few people took sips and put it to the side. Water was needed to wash it down afterwards.

The third drink, a gin and champagne cocktail,  was a visually appealing pink and foamy cutie. It was light, crisp and once again sweet, which wasn’t a problem in the beginning. However, if you let it sit, the sweetness once again gets in the way. This was paired with a chicken liver parfait served with a sprinkle of charcoal macaroon, smoked chocoale and pink peppercorn. And I’m sure you have guessed what I'm about to say, the pairing was just a tad too sweet for my liking.

With just a little over a week before World Champagne Day (October 23), one of the brands that keep popping up in everybody’s celebrations has ...
Good Life
1 year ago

The last drink was a frozen Martini with a cue of Turkish delight, paired with Miso salmon served with saffron Aioli, burned leak emulsion and Kalamata Olive. This last pairing was upsetting. The cocktail was too strong. Turkish delight tried to rescue the drink with some sweetness but the cocktail lacked balance over all. The burned leak emulsion also added to the bitterness and caused the tongue to shrivel whilst I was having heart palpitations from the alcohol.  I was unable to finish it.

When Kuhn was asked where he thinks, as a society, we are heading in terms of entertainment and meeting for drinks in the post-Covid future, he said that small at-home events with stringent screening processes were going to become more popular.

“The drinking experience is going to be surreal. It won’t be a bar where it’s loud, and they make you a drink and then you go away. The bartender will be there in your home with you and you’ll ask them about all sorts of drinking experiences, ” he concluded.