Actress Shonisani Masutha takes up her space in the hair industry 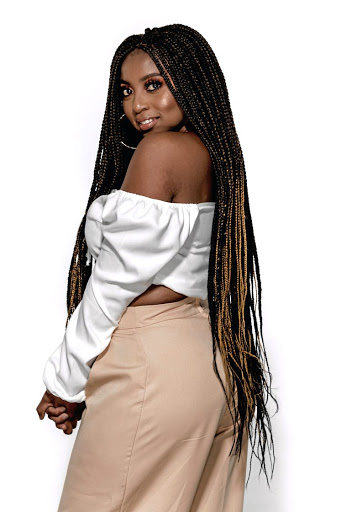 This is something the effervescent beauty kept in mind while inking her deal with local hairpiece manufacturer Afrotex.

Masutha not only has a hairpiece named after her, she also gets a percentage of revenue from each packet of Shonisani braid sold.

It is not hard to see why the brand would like to extend a partnership like this to her - she's popular, enthusiastic and engaging. She said her business venture feels like she's leaving a legacy and being an example for other black youth.

"I want us to feel a sense of ownership, not just because it's a black girl on the front of a braid packet but it's a legacy.

"At this age and time, I think it's important for us to start believing in ourselves and stop counting ourselves out and take opportunities by the hand and just go for it.

"And to let yourself go in the moment. I hope it's inspiring in terms of never counting yourself out. And ask for stuff that you think you're worth and never stop pushing the envelope also.

Nikiwe Dlova's hair styling is colourful, trendy and a lesson in history

Dlova dedicates her creativity to a curious mind during childhood.
Good Life
2 years ago

"It's about ownership; it's about what Zozi said, taking up space. I remember that is what was going through my mind when I was signing the deal," she says.

The Cape Town-born actress is a drama as well as a marketing graduate from the University of Cape Town. Not only does she lend her face and name to the Shonisani braid, she does all the marketing and social media for it.

"I feel like I'm putting to practice all of the theory that I learnt when I was doing my marketing and management at UCT. It feels good, I feel purposeful."

Masutha was last on set in February when filming Omen. She's currently auditioning and looking for acting roles. To keep her hair looking great, she says she took to YouTube due to the national lockdown to learn how to do her hair.

Natural hair salon with a touch of difference

She says that she considers taking care of one's hair self-care. She sat down and braided her hair for 12 hours but says she learnt a lot from the experience.

"I sat down that day that I was going to have to finish the braids. And also, I thought how cool would it be that I, Shonisani Masutha, used the Shonisani braid and braided myself for the first time.

"I just kept thinking that as I was going. But at the end that level pride! That's why I did that. I'm so proud.

"Those little things that make you proud throughout the day, like when I walked past a mirror I can look at myself and say I did that."