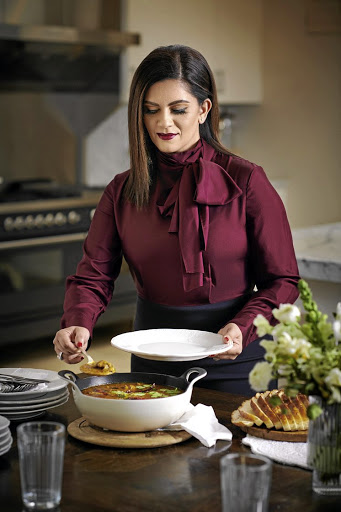 Naqiyah Mayat preparing one of her dishes.
Image: Supplied

SA's population may be small by some standards, but it has flavour. Our diverse people ensure that there are many
interesting overlaps in terms of our cuisine.

There is always more to find out about each other, like the tradition of seven colours, a Sunday lunch in the black community that is normally eaten after attending church. The lunch gets its name from the wonderful side dishes, often beetroot, potato salad and coleslaw (which is colloquially called John: 14) that normally accompany the meal of rice, gravy and meat, almost always chicken. I suspect this meal is a spillover from Sunday roast, a British tradition, and it is similar to Jummah lunch, which is served after Friday worship in the Muslim community.

This new knowledge came to light with the launch of Naqiyah Mayat's first cookbook, The Beginning: Indian Recipes from my Home.

Mayat, pictured, was raised as a Hindu but married into a Muslim family and her book guides South Africans to
authentic, modern South African Indian dishes.

"I think the perception that we have is that local South African Indian food tastes exactly like it does in the restaurants and I think what we eat in our homes is vastly different. I think it comes down to the spices that are used. A lot of the spices that are used in Indian-Pakistani restaurants are imported. So the tastes vary, the flavour varies and also the intensity of how the cooking methods and preparations are... The Indian food that the world is accustomed to is very different from what Indians home cook on a daily basis,'' Mayat says.

Time for mastery in the kitchen

She says her book shows the difference in the food that Indian South Africans eat on a daily basis, clarifying that Indian people don't eat curry all the time.

"I have an entire section that focuses on everyday weekday meals, things like roast chicken, which is obviously [done] the Naqiyah way. And I have stuff like chicken tandoori burgers and lamb kebabs, and it's not necessarily Indian-spiced but it does have Indian flavour notes in it or spiced flavour notes in it."

The mother of four cooks for her family every day.

"Every single Sunday I have a meal planner. I have actually created my own meal planner, which is available as a downloadble PDF as well. And I have listed Monday to Friday but I listed four meals a day. So breakfast, school lunch, afternoon lunch for when the kids come back from school, and dinner. How I normally break it up is I do a grocery list for everything that I have put down in my menu and I shop that on a Sunday morning or a Monday morning and I save those menus, so that I can refer to it six weeks later," she says.

Put more veggies on plate of meat and starch.
Good Life
2 years ago

She advises that one should keep one freezable item, for instance kebabs, which you can pair with pasta and some store-bought sauce for a hassle-free meal. Her golden rule is cook with your heart.

"I think I cook a lot with my heart and not with my head. Even though there are measurements in the book, adjust it to how you feel. I could be saying a teaspoonful of coriander powder but just heap that teaspoon, sprinkle it using your fingers. I don't think we practise being mindful enough, so practise mindfulness in the kitchen. How does cooking make you feel?

"When you're cooking a dish, explore the colours in the dish. It's amazing to take a spoon and dig into a container. Let it be heaped with spices. I don't think there are any rules when it comes to the amount of spices you can add, other than are you able to withstand that heat."