The 1970s spirit of black Christmas now fading away 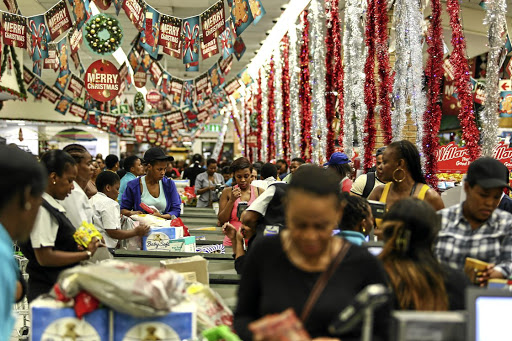 Shoppers queue at till points inside the Checkers Hyper at Sandton City in Johannesburg. The Soweto campaign of black Christmas in the 1970s called for a boycott of the holiday. /Moeletsi Mabe

The dusty streets of Soweto are filled with poverty and memories of oppression and segregation, but once every year the boundaries that divide neighbours are broken down and food is shared like a spiritual meal. All of this happens on Christmas Day.

By October, shopping malls are marinating customers for the big festive day on which the king of the Christians is born, so Boney M's classic belting out of the speakers of mall corridors, tall green Christmas trees, fake snow and glossy royal colours, are all part of the celebration.

Gifts, big and small, also play a large role. Who would of course forget Santa Clause, the man every child looks forward to seeing. However, for Sowetans, there are no one-horse sleighs and jingle bells; a different spirit to the Christmas season can be found here.

The rand might have taken a toll on how people spend and live over the years but during this time the bad boys and saints of the township come together to share a meal, laughter and relief at making it to December 25 alive. This is also a time when gogos are cashing in on their stokvel savings.

Soweto has been known for its political campaigns and one of them included the concept of black Christmas, which was introduced in the 1970s.

The concept sought to decolonise the religious holiday while throwing a jab at white-owned business.

One of the pioneers of black Christmas, Oupa Moloto, a Soweto resident and Struggle veteran, shared his memories of Christmas in the township.

The youth of his time called on all township residents to stop spending large amounts of money on Christmas celebrations and boycott the holiday. Moloto says following the June 16 1976 march where many students were killed and some displaced, the student movement decided to embark on more marches but they were met with more brutality by the police. "Remember, after the march of '76 students were shot by police and they tried marching again in August that year; they could not make it to town because the police stopped them in New Canada.

"The march was then planned to be in town but the brutality of the police did not allow that. Three quarters of them were arrested."

The 60-year-old Moloto said the students then decided to embark on new strategies that would send a message to the white government, including calls for a black Christmas.

"We saw Christmas as a way that the enemy wanted to exploit our people. The way things are advertised and marketed it makes people overindulge and you find that people buy things that they do not need. More than anything, they indulge in drinking and buy more alcohol.

"When January comes people do not have money. We called on our people not to celebrate Christmas."

All 'Tamatie' wants for Christmas is a toothbrush

When Bokamoso Mathibe was asked this week to choose any gift as a Christmas present - the 10-year-old boy chose a toothbrush.
News
2 years ago

Moloto said he was concerned that Sowetans had forgotten about the black Christmas campaign. "People talk about gifts but people are not buying books. They are not empowering each other."

Moloto said the Christmas season was a religious feast draped with politics. "Our parents were economic immigrants. Right through the year, it was poverty but on this one day, we are expected to celebrate. When I was young and we went to the shops around Christmas, we were not given toys by the Father Christmas in the shopping centres but the gifts were given to white kids."

The birth of the king of the Jews has been a controversial point, but one thing the Christmas holiday has been able to do is to unite families and create a reminder to love and give.

Clans unite under their four-roomed houses on this day, as blood becomes even more thicker than water just for these few moments.

For township residents, Christmas is a time to be happy regardless of the hardships.

The founder of December 25, the Catholic Church, has emphasised that the season was not a European season but a time for the world to reflect on the birth of a Messiah.

Dreams of a white Christmas for Western Cape on ice

Cape Town residents may have to put their dreams of a white Christmas on ice.
News
2 years ago

A spokesperson for the church in SA, William Slattery, said the church expected this season to be a reflective and prayerful one.

"This is a wonderful event where God's own son comes to us as one of us, we should be happy and rejoicing and we should use this time to show love to the poor and young people," said Slattery.

He noted that Africa did not have to celebrate this season in the same way as that of Europeans. "We in Africa can have picnics and we can have braais but what is common is that we pray all over the world on this day," he said.

While those in the northern suburbs are running around looking for Christmas decorations and the best turkey, abomagogo (grannies) in the township are cleaning their gigantic three-foot pots, expecting to receive their children and grandchildren back home for Christmas Day.