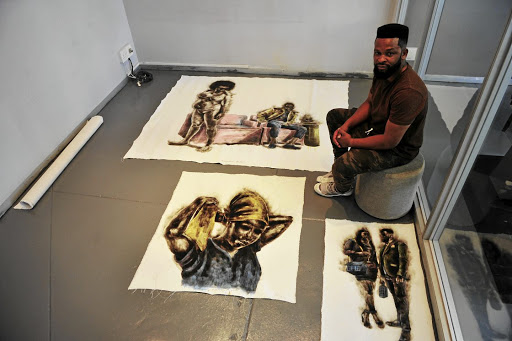 A wispy faceless figure runs with his hand in the air, at his feet a drunken donkey-faced man lies holding a bottle and another figure which looks to be a young man playing, is evident in the art piece too. Behind the wispy figure is an etching of the Johannesburg skyline.

The picture is otherworldly, a little glimpse of Hades's kingdom. It is a piece that invokes a feeling of slight horror and fascination.

There's also a feeling the artist is conveying disdain, the drunken asses on the ground lead you to this conclusion.

I was to later find out that the piece was very much a political statement, it was the artist's Azael Langa's comment following the deaths of women at the hands of their partners. 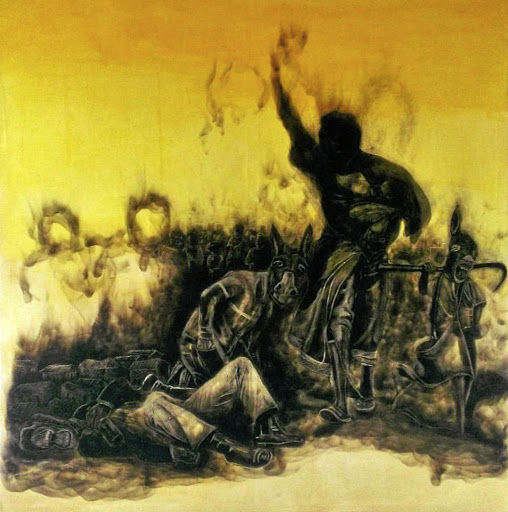 Men, he says, were seemingly absent and silent during this period.

His works are much lighter now though the method he uses fumage which is a surrealist art technique where smoke from a candle or kerosene lamp is used to create impression on a piece of paper or canvas, still gives the art pieces an otherworldly look.

Langa says although he has been using the smoke technique since 2013, he realised that the energy connection changed when he lost his brother last year. He is still baffled by the circumstances of his brother's passing, which remain unclear and the painting helps. 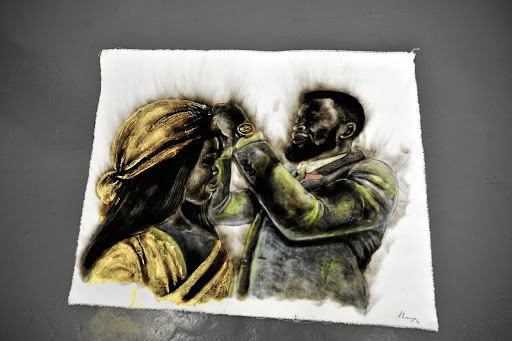 The Daveyton-born artist says the contradiction in his work is that most people say it is dark, but he never paints when he is sad.

"Every image that I make, I make it when I'm happy because I paint spirits, it's me trying to capture the essence of a spirit in my work. When I do that, I give back to those energies," he says.

By giving back, Langa says that since he walks the streets of the city and takes images to inspire him, his way of returning the energy his subjects give is to paint them.

"I express what I felt at that time, it's either in the form of me trying to say something to them or me trying to heal them or it's me trying to give something back to them. Because it's quite weird to have someone walk up to you and try give you something. What I do is I light a candle and meditate before I paint." 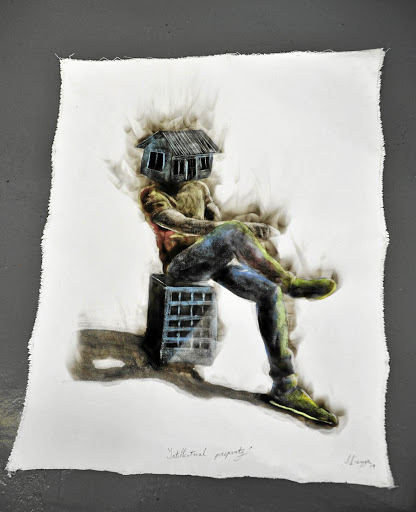 "It's just art for me, there's nothing else. It just chose me."

The 31-year-old, who is also a sculptor, says that he will be blending his mediums to create more of his art. He says the African art market is changing and growing.

"The international market is a broader market that allows you to grow. With the South African market we're growing and while we grow we are also teaching each other," he says.