Escaping the Amazon: A South African breaks out of the French Legion, cheats death and finds peace 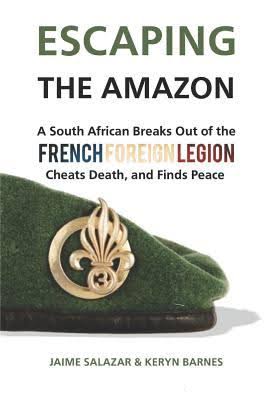 Escaping the Amazon: A South African Breaks Out of the French Legion, Cheats Death, and Finds Peace

Caught in the notorious doldrums, we floated helplessly in the Atlantic—the Blue Amazon—near the equator, and it had been a week since we had had a mere puff of wind fill the raggedy sails of our damaged and leaking boat. How did I get myself into this?

Three men were about to die of thirst, and it was my fault. Was the only unforgivable sin stupidity, or hubris?

Pride comes before the fall, they say. I felt the piercing sun drying the water right out of my skin as if life was being slowly peeled from my helpless body.

This was one of the most painful ways to go, especially with so much water around us. If I drank seawater, I’d end up pissing out more than I consumed to rid my corpse of the excess salt. What if I sipped small amounts?

I resisted the temptation and lay stoically on the hard deck, on scorching planks that broiled me from below.

Above us were the vapor trails of airliners en route from Rio de Janeiro to Miami. Save us! My mind screamed, yet I could barely twitch a muscle.

There was a sudden break in the sun’s relentless radiance, which prompted me to again peel my encrusted eyelids from each other.

A bird was circling us in wide berths, its intimidating wingspan casting a shadow. It was waiting for the sun to finish us off. This is it. We won’t end up as fish food but bird shit.

“It’s a Brown Booby,” said Connor, our Australian wunderkind at the helm. “They’re harmless. Their presence means that land might be closeby. Vultures don’t make it out this far.”

“How the hell do you know that?”

He didn’t answer. I chalked it up to his mysterious and angelic wisdom. The bird was disinterested in our agony but simply hovered over us like a watchman. Connor was plopped at the cockpit with his legs up, one arm on the wheel and the other holding onto a dog-eared paperback, The Kite Runner, which he’d been reading to Vasile, a young Romanian, and me the entire morning. “It may be unfair, but what happens in a few days, sometimes even a single day, can change the course of a whole lifetime ...”

Such asides kept our minds away from death, which was crawling closer to us by the hour.

“Connor, I can’t take the thirst much longer. Please pass me a little water,” I asked as sticky white saliva formed strings between my cracked lips. “We only got a liter of fresh water left, among us three,” he cautioned sternly.

I became paranoid that Vasile would drink all of it while Connor and I slept, and blame me for the crime. Desire could turn any man into an animal. But then Connor chucked a bottle at me.

“I was joking. Enjoy a good swig of mine. I’m not thirsty.”

I knew he was lying. He always sacrificed himself for others, but I wasn’t about to let him die for my depraved soul.

“When do we drink our piss?” I asked boyishly. “Should we start saving it just in case?”

“Stop thinking about that,” Connor muttered. I then picked up a container and relieved my bladder of viscous urine, which had the color, smell, and consistency of motor oil.

Vasile was lying below deck, the only shaded area on the boat, to escape the blazing sun. We could roast out on the deck, or sweat out our last drops of water and suffocate in the hold.

The hull was sleek and slender but had long ago turned brown from neglect. Below deck, frayed wires and broken instruments were scattered about.

We had to take it or leave it if we wanted to get the hell out of Paramaribo after I’d been freed from jail.

“You expect us to pay top-dollar for a leaking, gutted, Styrofoam cup with a rotting sail?” Connor protested to the local fisherman, but we had no other options.

In a mad rush to come and save us from Paramaribo, Connor ran squarely into a shoal, taking on a lot of water. He barely avoided scuttling the vessel, but the flooding left it without any useable instrumentation.

On our first attempt to leave Paramaribo harbour, a rope tangled around the spinning propeller and the packing gland snapped. All that now held it together and kept the boat from being swallowed by the Atlantic were two vice grips and four cable ties. For good measure, Vasile added his used chewing gum as a backup patch.

Vasile opened his eyes as I stepped down into the cockpit. “Which way we heading?” he asked.

The Legion meticulously taught us to navigate according to the sun, stars, or landmarks, but those skills were useless if we couldn’t control our direction.

With the powertrain in ruins, we were entirely at the mercy of the Guiana Current, which was pushing us into the Caribbean, the wrong trajectory.

I avoided sitting at all costs to avoid the horrible spins and vertigo, but my emaciated legs eventually gave out. As I sat down, I immediately swung my body around, gripped onto the stern rail, and started retching. Every muscle in me clenched, and my stomach contracted like a bagpipe. A week of sickness left very little for my body to eject.

We’d gone through our provisions but didn’t need much food anyway, for it only brought on thirst. We’d die from a variety of ailments before we starved.

I’d gone days without a single calorie during the Legion’s renowned Advanced Jungle Warfare Course. During the last days, we were allowed the delectable treat of fat, white tree grubs.

Finally, some yellow bile and blood made its way up, and I projectile-vomited it into the ocean, reminiscent of The Exorcist. My throat burned from the acid. My eyes were watering, and sweat ran from my forehead to my nose. I sat and simply stared into the water. “Make it go away!” I pleaded to whatever higher power was listening. I then felt an indescribable peace when the heaving stopped. But as I gazed deep into the water, I noticed three Great Whites appear from the depths.

“You bastards smelled my blood and bile, huh?” The largest one darted directly towards me, staring deep into my bloodshot eyes. His dorsal fin broke the water and grazed against the hull as he joined the other two. I looked again and saw that the shark had a sick smile on his face.