BOOK EXTRACT: I am Costa: From Meth to Marathons 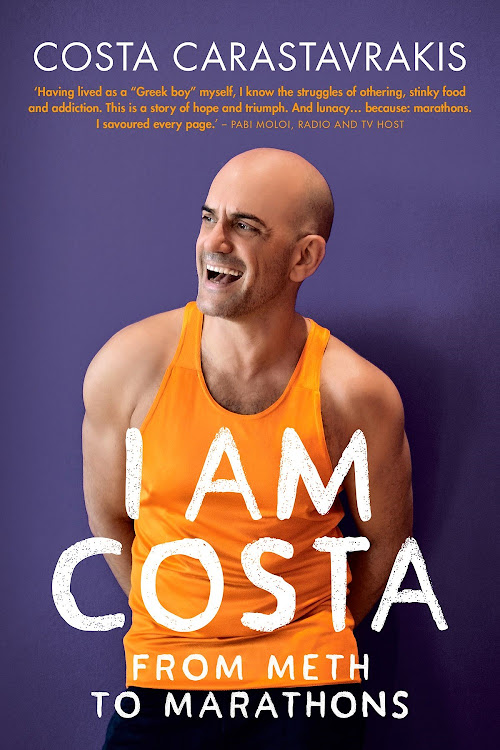 TITLE: I am Costa: From Meth to Marathons

– mom, about practically anything I did

The start of an Olympic-distance triathlon! I’d grown to love triathlons, but one with the word ‘Olympic’ in its name stirred a particular emotion in me. I’m Greek, and proud of my heritage. Here I was, standing at the start of a race that would test my all-round athletic ability, I’d have to swim 1 500 m, cycle 40 km and finish off with a 10-km run. You often hear people complain that they can do the swim and run, but they can’t really cycle. Others love the cycle and the run, but can’t swim. I roll my eyes. They’re missing the point: triathlon is one discipline – it’s all three activities, one after the other. At 42, I was ready to start my first-ever Olympic-distance race in Germiston, east of Joburg.

Helmet, glasses, gloves, cap, towel, water, nutrition … the list went on and on.

Triathlon calls for lots of gear on race day. But I was ready. I was so ready to take on this race. I had the one-piece suit on and looked like a real triathlete. I’d started doing triathlons a year before and was finally about to start an event at the pinnacle of my sport. A Greek, about to get all Olympic, following in the footsteps of my ancestors who had created the games to celebrate human endeavour and the perfection of the body and its ability to be pushed to the limit.

I was one of those men, now – fit, healthy and ready!

Who would have thought that 10 years ago I was writing poems about killing my 12-year-old self? That, soon after that poem, I would find myself in a deserted house in rural Mexico with a junkie, smoking crack cocaine for the first time? That, eight years before this race, I’d started a downward spiral that would bring me close to death two years later? How does a downward spiral like this happen? Had the seeds been planted long ago?