Crime: why 'throwing away the key' doesn’t help 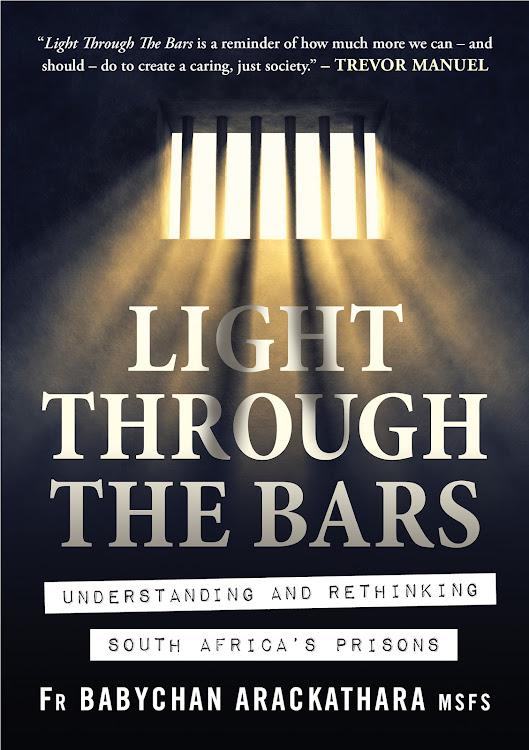 “Lock them up and throw away the key”: the standard response to the endless tickertape of crime that disrupts, damages and too often destroys the lives of South Africans.

Reeling from senselessly violent criminal activity, ordinary folk are fed up. Few topics summon up as much rage, terror and repugnance as the constant invasion of our homes, the attacks on our bodies and properties. It seems that everyone is either a criminal or a victim of crime. It’s natural for the latter to regard the former with loathing.

However, an extraordinary man has written an extraordinary book based on the insights and experiences he gained while working as a prison chaplain in some of the country’s most notorious prisons, including Pollsmoor. Light Through the Bars: Understanding and rethinking South Africa’s prisons (Mercury) is a powerful reminder that our current approach to criminal justice is not working. It proposes a radical rethinking of both criminals and crime.

Father Babychan Arackathara (MSFS) is that rare creature, a clear-eyed optimist, in spite of two decades doing one of the most challenging jobs imaginable. An expert on restorative justice, he argues that if we have the courage to look squarely at the overall problem of crime, it becomes clear that we all have a role to play in solving it. The difficult (but ultimately hopeful) truth he presents is that crime is so entangled in our social systems and their failures that it is only through dedicated partnerships between the state, civil society and ordinary citizens – that’s us – that we will be able to reduce it.

In 2018, the Department of Correctional Services received a budget of R22 billion – a staggering figure, almost as much as received by the Department of Basic Education (excluding provincial allocations). Yet we have one of the highest recidivism (re-offending) rates in the world, hovering at around 80 per cent. (By comparison, 20 per cent of Norway’s ex-prisoners return to jail within five years of being released.) Despite interventions, some of our correctional facilities have become “universities of crime” that recruit and train young people, and press them to gain their sense of identity and guidance from gang membership. Offenders are not being rehabilitated; instead, many emerge from prison to enter more fully into a life of crime.

Ironically, we have excellent guiding principles in the White Paper on Corrections, another list of now crumpled resolutions that propose rehabilitation in line with Constitutional principles and rights as the correct path to follow. Sadly, the criminal justice system, along with the DCS, falls far short of implementing these admirable goals.

The current model of retributive and punitive justice demonises prisoners and leaves the needs of the victims out of the equation. Scant regard is given to the practical obstacles that ex-offenders face on leaving prison. The vast proportion of the prison budget goes to punishment – we spend R132 000 per prisoner per year – while a mere trickle goes to rehabilitation, education, and social and spiritual programmes. Meanwhile we are no safer from crime; every day, the headlines trumpet yet more brazen offences.

There have been some improvements since 1994, especially regarding educational opportunities. Most offenders are able to study for matric at least, and provisions have been made at a few facilities for mother-and-child inmates.

Generally, however, calls for shorter sentences, with more emphasis on community service and probation, more humane conditions, diversion programmes for at-risk youth and so on, are all trumpeted as “soft on crime” – a death-knell for a politician’s career.

Yet these proposals have been shown, around the world, to reduce crime. Simply reforming the bail system will save millions of rand while preventing miscarriages of justice, over-crowding and needless suffering. Those awaiting trial make up one-quarter of our prison population, which means that thousands who are guilty of no crime spend months incarcerated with violent, mentally ill and hardened criminals – effectively being groomed for a future in crime – simply because they are too poor to pay bail.

Father Babychan shows a hidden world in which small gestures of compassion and reparation stem the flood of crime; in which restorative justice programmes reunite broken families, honour the needs of victims, and insist that offenders take responsibility for their choices and crimes. Probably most important for the rest of us, his book presents real, practical alternatives to punitive justice, some of which (such as community service) may seem counter-intuitive at first, but all of which have been proven to reduce both crime and re-offending.

One of the most obvious is to turn prisons into hives of activity and productivity. Correctional facilities with bakeries, functioning libraries, vocational training, mechanics’ workshops, brick-making kilns, hairdressing schools and more not only bring in revenue, but produce ex-offenders better suited to employment once they rejoin society; they possess self-respect and pride, and are more able to resist the vortex of gangs, drugs and alcohol abuse. Education goals can be paired with sentencing incentives: in Brazil, some facilities cut sentences by a day for every book a prisoner reads.

The book ends with a comprehensive list of all those who have a role to play – from the judiciary and the Departments of Correctional Services and Social Services to the offenders and ex-offenders themselves, along with their families, spiritual careworkers, social workers and communities – and a clarion call to action. Churches, mosques, schools, even foreign embassies have a contribution to make. Above all, the general public and politicians should stop insisting that prisons be places of punishment only: this ultimately leads to yet more suffering at the hands of re-offenders. Instead, we need to start demanding that prisons work effectively to rehabilitate offenders and prevent recidivism, which places us all at risk.

Hopelessly idealistic? Not at all: Father Babychan’s experiences in the frontlines mean that his insights are rooted in pragmatic and sometimes grim reality. One of the most valuable sections of his book is his conclusion: a crisp, clear list of practical steps that everyone, from political leaders to humble communities, can take to end crime – once we accept that it is a social problem with its roots in a broken society, and that every one of us has a role to play in addressing this symptom of dysfunctional families, communities and state.