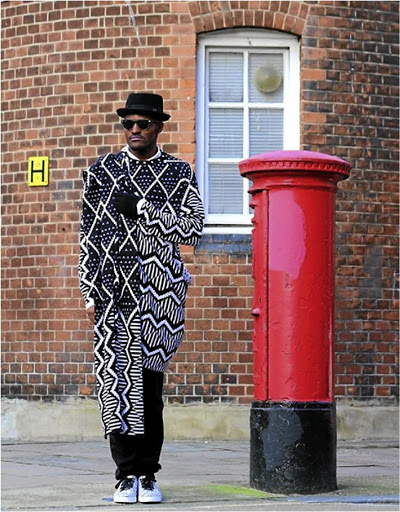 Designer Laduma Ngxokolo of MaXhosa shows off a shawl

Laduma Ngxokolo, Rina Chunga of Rich Factory and Sandiso Khumalo scored a career high when they were revealed as the three fashion designers for this year's Vodacom Durban July.

The trio were unveiled at a swanky event aboard the Blue Train in Pretoria on Sunday.

They are tasked with designing a special collection of five pieces, respectively, to celebrate the theme of this year's July - Once Upon an African Future.

Their works will be on display at the Paddock when socialites, celebrities, business titans and politicians let their hair down at the event known as a highlight on the social calendar.

Toasting the news, Laduma said it would introduce him to new audiences.

"When it comes to this kind of events MaXhosa is not a name that pops up. I think it was brave of the July deciding to go the unpredictable way with brands that specialise in ready-to-wear," said Ngxokolo.

"We were given a theme which we think is a challenging one. Everything African-wear inspired people, don't think of it in a way that evolves. Afro-futurism has always been a chord for us every time we design a collection and try to surprise people.

"Because we are known as a knitwear brand, people always expect to see jerseys and cardigans. Then we gave them golfies and then we had prints on chiffon and velvet."

Three ways to make your collaboration a success

Collaborations have become a big buzzword in corporate and influencer marketing spaces.
SebenzaLIVE
3 years ago

The MaXhosa by Laduma trademark textile was inspired by the Xhosa heritage with its unique patterns and vibrant colours.

Stars from Beyoncé to Alicia Key have been spotted in it.

In other matters, Laduma's legal battle with global clothing giant Zara has almost reached an end.

Updating Sowetan, Laduma said they have made some huge strides since the case broke out a year ago.

Last year his famous knitwear brand, MaXhosa by Laduma founded in 2012, accused Spanish retail giant Zara of copying his signature design on a pair of socks.

"The Zara case has made tremendous progress. We are almost at the ending tail of settling out," Laduma said.

"Our lawyers are finding strategic ways to get the word out there that it was an error and this is how it's going to be addressed."