Ndaba on Madiba, his strict grandfather 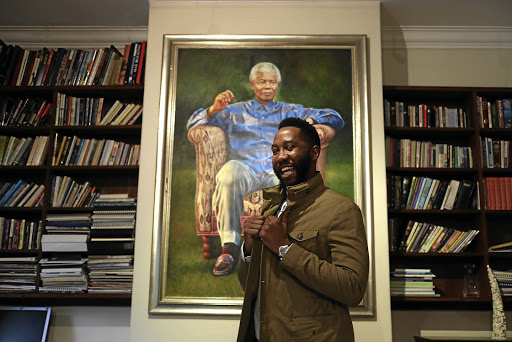 Ndaba Mandela's new book, ' Going to the Mountain: Lessons from my Grandfather, Nelson Mandela', relates the relationship between the world icon and his grandson Ndaba./ ALON SKUY

Ndaba Mandela is a tall man, even as a teenager, but as he stands, head bowed, in front of his grandfather, Nelson Mandela, he doesn't feel that way.

The Old Man, as he is affectionately known, is giving him one of his famously harsh lectures. Just days earlier, while a teen and in high school, Ndaba is bust "out enjoying the pleasant weather and sharing a nice fat spliff" with some friends.

His school finds out and he is suspended for a week. But Madiba didn't yet know about the incident until a local newspaper, without mentioning names, reported on it.

With Ndaba "already known for blazing mad joints", he had no choice but to confront his grandfather.

"He sat in his chair, listening in that deeply listening Madiba way as I floundered through the whole sordid tale," Ndaba says.

Ndaba recalls that Mandela was "angry".

"But more than that, he was deeply disappointed. After a while, he told me to go. Walking out of that room, leaving my granddad with this expression of sadness on his face, I felt like I'd been punched in the throat. But I was determined to fix this," he says.

This story is contained in Ndaba's book, Going to the mountain: Lessons from my grandfather, Nelson Mandela.

Mandela's doctor a 'loser' who wanted to exploit my grandfather's name: Ndaba Mandela

It is a deeply personal account of Ndaba's journey into manhood with his grandfather towering over him.

"My thing is to find a way to answer how we make sure people understand the value of Nelson Mandela," he said.

He said he wanted to do something around what would have been Mandela's 100th birthday but he wanted it to carry more weight and have a long-lasting impact.

"For me, it's particularly looking at the younger generation because the older generation are very familiar, they know exactly what the value of Nelson Mandela is.

"The younger generation may not be as well versed with Nelson Mandela and what he means to the world. For me, it was taking lessons and
making them relate to kids in the 21st century," he said.

Despite this lofty ambition, the book is not mere fluff. It deals with hard issues,including Ndaba's staunch criticism of how his grandfather handled his parents' marriage, the death of both his parents from HIV (and how he drank himself to sleep in the time building up to his mom's death), and how his relationship with his older brother, Mandla, has broken down completely.

Former president Nelson Mandela’s doctor‚ Vejay Ramlakan‚ may be entitled to freedom of expression‚ but that right can be limited when there is ...
News
4 years ago

The book goes into depth on Ndaba's circumcision and passage into manhood and even how Madiba rejected the first suggestion that it was time to go through the ceremony by saying: "This boy is not ready."

It also contains light-hearted moments and also reveals that Mandela was by no means soft on his family. "When he did crack down on me, he scolded proper. You felt that growl like thunder," Ndaba writes.

"This was far worse than having him be mad at me; he was disappointed. I'd be chilling in the lounge in front of the TV and hear this deep, rumbling voice from upstairs.
'Ndaba. Come and clean your room'. That was my cue to get up there and tidy up while he stood in the door, delivering a stern talk about personal responsibility.

"He made me keep my room tidy, and he kept his own room tidy despite the fact that household staff would have been happy to do it. He was strict, and that caused some friction between us over the years."